Macdeath - a story inspired by Macbeth, written by Pamela Butchart and read by Shirley Henderson

Macbeth is one of Shakespeare’s bloodiest tragedies. With its mixture of murder, ghosts, witchcraft and general mayhem, it is always a huge hit with Primary-aged children.

In this adaptation, the narrator is a primary school pupil who volunteers to tell the story of Macbeth to her classmates. What follows is an exuberantly funny version of the tale told in a distinctively modern and childlike voice.

Campfire stories: The way the narrator tells this story is reminiscent of spooky campfire stories; both funny and scary. Once the children are familiar with the broadcast and have been introduced to some of the dialogue from the play (above), you could have them sit in a circle and retell the story of Macbeth from memory, using speech and drama to really add to the performance (eg speaking in a witchy voice or remembering and re-using some of the actual dialogue in the appropriate parts of the story). The story can be passed around the circle by saying ‘…and then…’ when a child has finished speaking their part. This is non-confrontational as a child can simply pass the baton without saying anything if they do not remember any detail by simply saying ‘and then…’ rather than adding anything further.

Writing spells: Macbeth features arguably the most famous spell in English literature. This is perfect for learning and reciting (in line with the KS2 curriculum requirements)

Double, double toil and trouble; Fire burn, and caldron bubble.Fillet of a fenny snake,In the caldron boil and bake;Eye of newt, and toe of frog,

Wool of bat, and tongue of dog,Adder's fork, and blind-worm's sting,Lizard's leg, and owlet's wing,—For a charm of powerful trouble,Like a hell-broth boil and bubble.

Print the following statements onto card or write them on the whiteboard. Once children are familiar with the story they can discuss and debate these opinions or write a persuasive/ balanced argument based on one of the statements.• Lady Macbeth is evil. She has no good qualities• Macbeth is the hero of the story• The witches control everything in the story• There are no innocent characters in the story

The narrator tells us some really funny facts in modern childspeak about Macbeth (what he eats for breakfast, what nickname he uses for Lady Macbeth etc.) and about Lady Macbeth (that she steals crisps on the playground and makes people peel grapes for her etc.). Children could create a table of further ‘modern child-speak facts’ about key characters including Macbeth, Lady Macbeth, Banquo, Macduff and the Witches, giving clues about their characters.

Duncan (1034 – 40) and Macbeth (1040 – 57) were real kings of Scotland. Children could research the real stories of these two kings and compare Shakespeare’s story with historical fact.

Break the story down into 10 sentences (or have the children dothis once they are familiar with it). Divide up the 10 sentences between groups of 3 or 4 and have them freeze frame their individual sentences. Put this together for a quick whole-class retelling of the whole story.When introducing dialogue (see above) print off dialogue cards and give each child one card. Ask all children to move around the classroom space, quietly muttering their line. After a while give them an instruction to say the line differently (eg to say it like it was a secret, to shout it to the top of a mountain, to say it as if it was the punchline of a joke, as if performed by a hammy actor, etc). Once the children are familiar with their line some may want to perform it to the whole class, but this time in context as the character from the story. 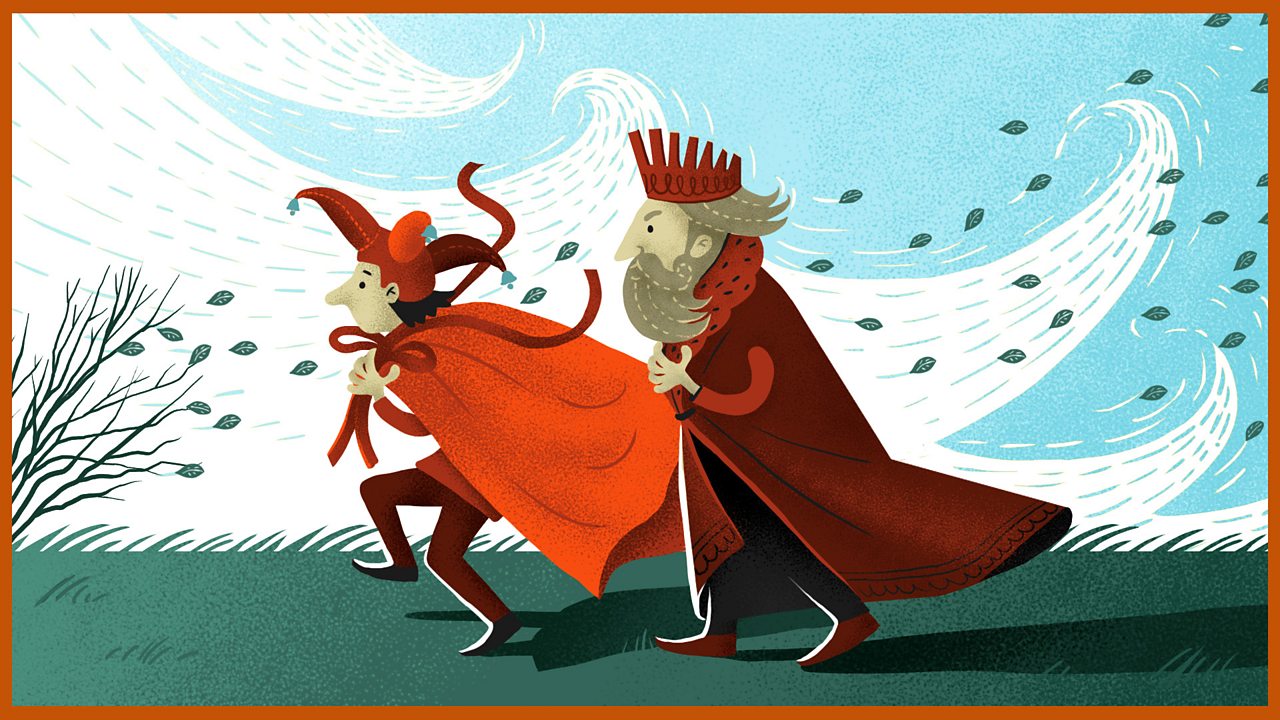 King Lear: A Tragedy in 5 Acts

A fun and irreverent retelling of King Lear that centres on Lear and his daughters. Written by Andy Stanton and read by Simon Callow.