Summary: You could schedule this assembly close to Holocaust Memorial Day (27th January), the anniversary of the liberation of Auschwitz-Birkenau concentration camp. On this day, we remember the millions of people murdered by the Nazis and those who died in later genocides in Cambodia, Rwanda, Bosnia and Dafur. It is a time to consider how we challenge discrimination, racism and hatred, which left unchecked lead to such crimes against humanity.

Resources: The framework to download / print (pdf). The assembly also includes an image of Hungarian Jews arriving at Auschwitz-Birkenau in 1944.

NB - Ensure you watch the video in advance to assess its suitability for your group.

In the video pupils Beatrice and Lamek meet Steven Frank at Croydon Airport Museum. Steven tells them how in WW2 Nazi Germany tried to take over Europe and destroy the Jewish people. Back then, Steven was five. The Nazis forced Jewish families like his to wear yellow star badges. They were banned from many places and forced to live separate lives.

Later, most of Steven's family were sent to Theresienstadt, a prison camp. Many Jewish people died there from disease and harsh treatment. Steven's mother kept the family alive with bread-and-water stew. At the end of the war Steven came to the UK, landing at the very place they are meeting now: Croydon Airport.

End of speech: 'We are all different, but we should be respectful of one another.' 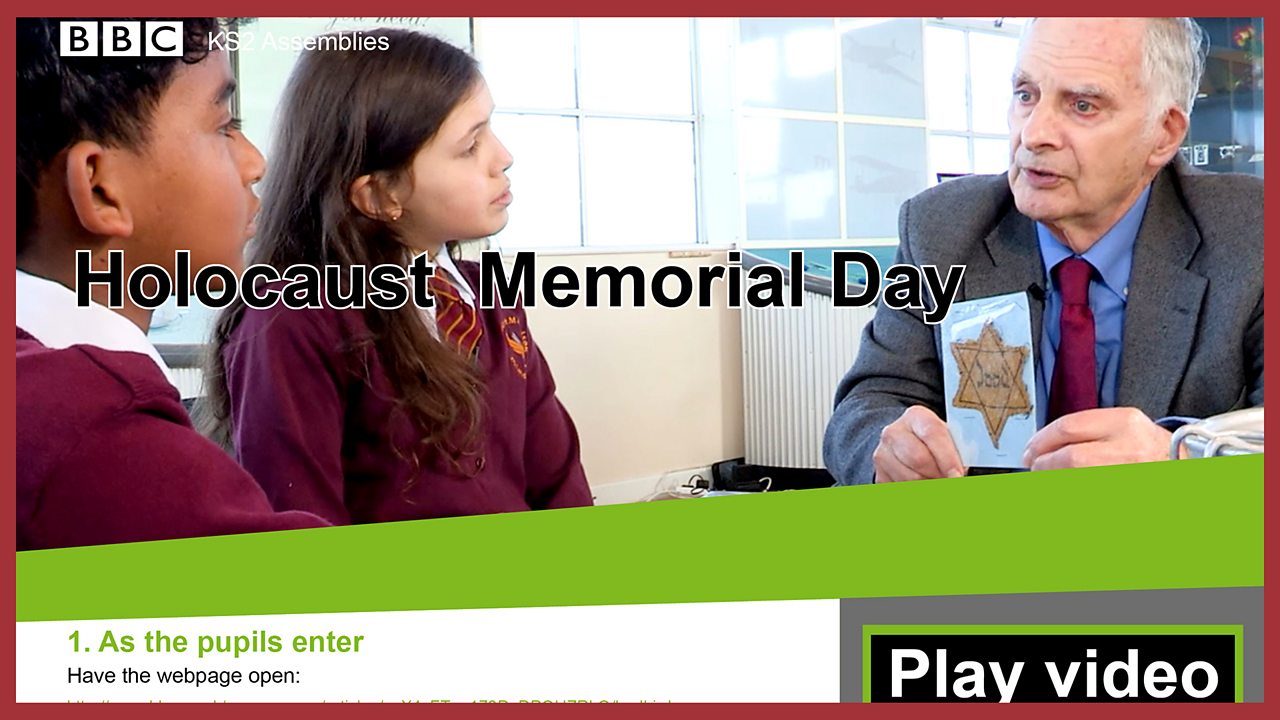 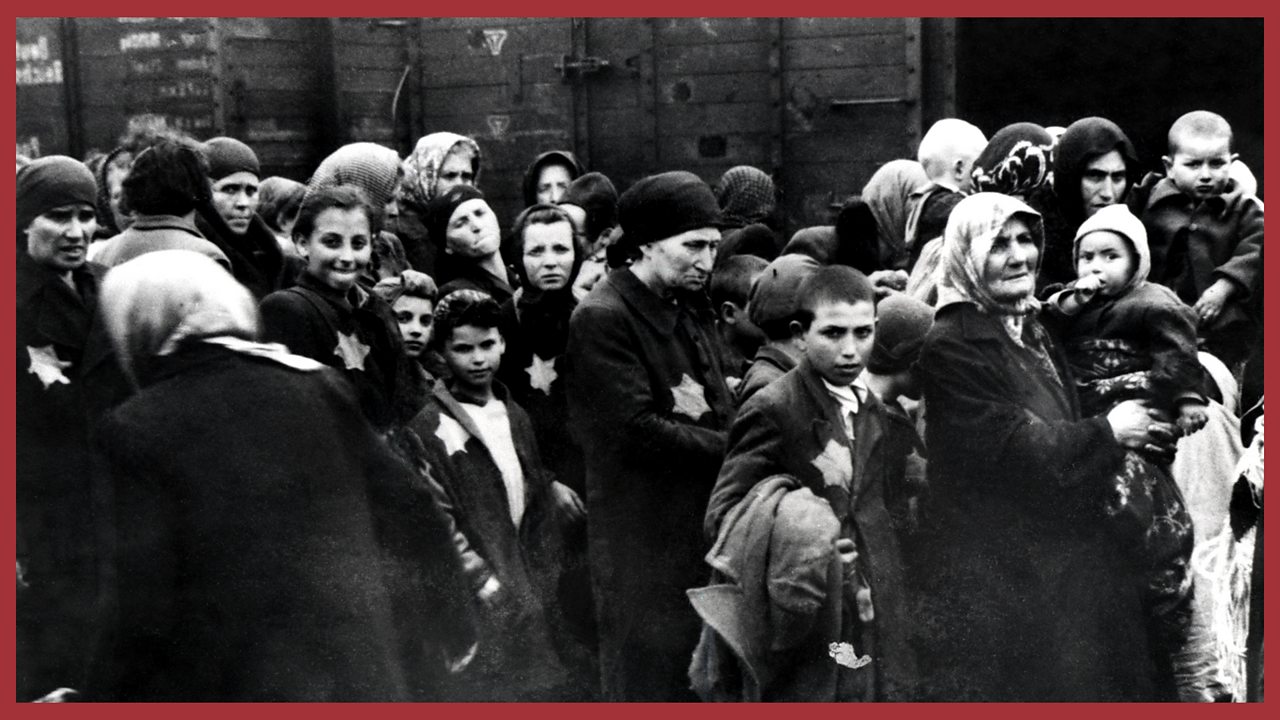 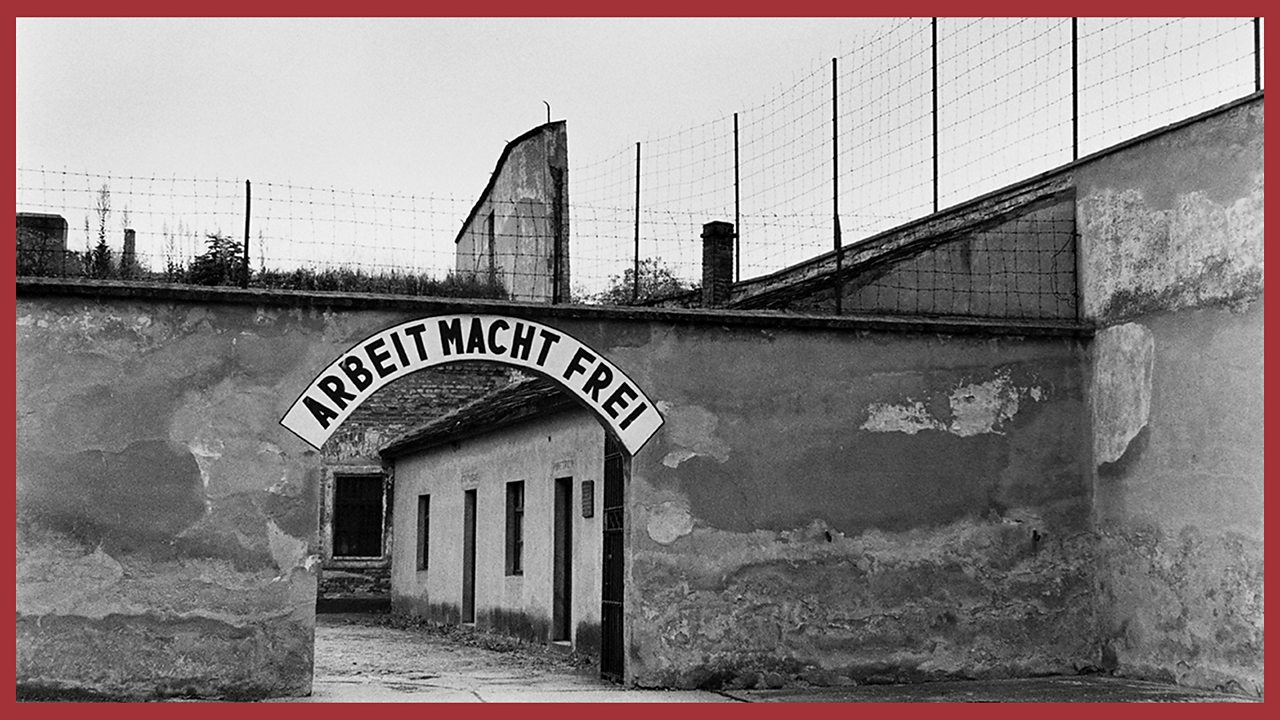 1. Entry musicFor entry music you might choose works by Pavel Haas or Gideon Klein, composers sent to the same camp in Terezin as Steven Frank. See 'Related links' below.

2. IntroductionTell the pupils that Sunday 27th January is Holocaust Memorial Day. Give them brief, clear details of the Holocaust. You might say something like: 'Holocaust is the name given to Hitler's attempt to wipe out the Jewish people of Europe. During the Second World War - 1939 to 1945 - Hitler led the Nazi party which ruled Germany. On his orders, Jewish people were put in prison camps and many were killed. Families were torn apart. Around six million Jewish people were murdered by the Nazis, as well as disabled and gay people. On Holocaust Memorial Day we remember all those who faced such cruelty, both in Nazi Germany and in similar - more recent - horrors around the world. For example, in Cambodia, Rwanda, Bosnia and Darfur. Today we're going to watch as two school children interview someone who lived through the Holocaust.'

3. The videoPlay the video. The duration is 5’ 32” and the final words are: ‘We are all different, but we should all be respectful of one another.'

4. After the videoAsk the children to pause for a moment of silence as a mark of respect for those who experienced the Holocaust.

5. Time to talkDisplay the image (see Key links) which includes children wearing the yellow Star of David. Ask: 'How do you think Steven Frank felt when he was made to wear the yellow star badge?' Gather pupils' responses.

Remind pupils of the family photographs in the video. They show Steven's father, but Steven only mentions his brothers and his mother in the camp. Ask: 'What do you think might have happened to Steven's father?' Gather responses.

Remind pupils how Steven's mother protected them in the prison camp from the killer disease Typhus by washing their clothes secretly in the hospital laundry. Ask: 'What might have happened to them if she had been caught?' Encourage the children to list words to describe Steven's mother. They might think of 'brave', 'clever', 'determined' or 'kind' and 'resourceful', for example.

How would the children describe Steven himself, from their viewing of the video? Again, the children could come up with a list of adjectives. Encourage the children to think of questions they would have liked to put to Steven Frank. Ask: 'Steven clearly went through a terrible, terrible time. So why do you think he made this video? What do you think Steven's message to us would be?'

Gather the responses and close with Steven's own words: 'We are all different but we should all be respectful to one another.'

6. Opportunity to singIf your assembly is to include a song this would be a good time for it. Suggestions from the BBC collections are below.

7. Opportunity to reflectAsk the children to close their eyes. Tell them: The Holocaust shows the worst of human behaviour: racism and cruelty. But it also shows us how strong, kind and brave we can be. When we see the people in our lives treated cruelly, what should we do to help? What will you do to be strong, courageous and kind?

8. Opportunity for prayerUse your standard form of address ('Dear God', etc) and:We remember all those who experienced the Holocaust, both those that died and those that survived.Help them all find peace. And help us to always be ready to stand up to cruelty.Help us to be strong and brave and kind, so such things can not happen again.Amen.