Summary: This assembly celebrates the Platinum Jubilee of 2022. Queen Elizabeth II succeeded to the throne on 6 February 1952. The 70th anniversary of her succession was marked with celebrations across the UK on a special bank holiday weekend from 2 - 5 June. The video looks back at the reign of Queen Elizabeth and explores some of the notable changes that have occurred during it, including changes in technology, communication, jobs and society.

Resources: The framework to download / print (pdf), a portrait of Queen Elizabeth II (taken from our film) and an image of Jubilee celebrations from the Diamond Jubilee in 2012.

The video celebrates the Platinum Jubilee and the long reign of Queen Elizabeth II by marking some key changes that have occurred during it.

Queen Elizabeth succeeded to the throne on 6 February 1952, following the death of her father, King George VI. The Coronation followed in 1953, an event that could be shared nationally for the first time due to the recent invention of television.

Over the next 70 years many aspects of British life changed. The video covers changes in the work place, in technology and communications, in the increasing diversity of UK society, and our understanding of the environment and climate change. It has been a period marked by great change, but also by one notable constant - the presence of Queen Elizabeth herself. 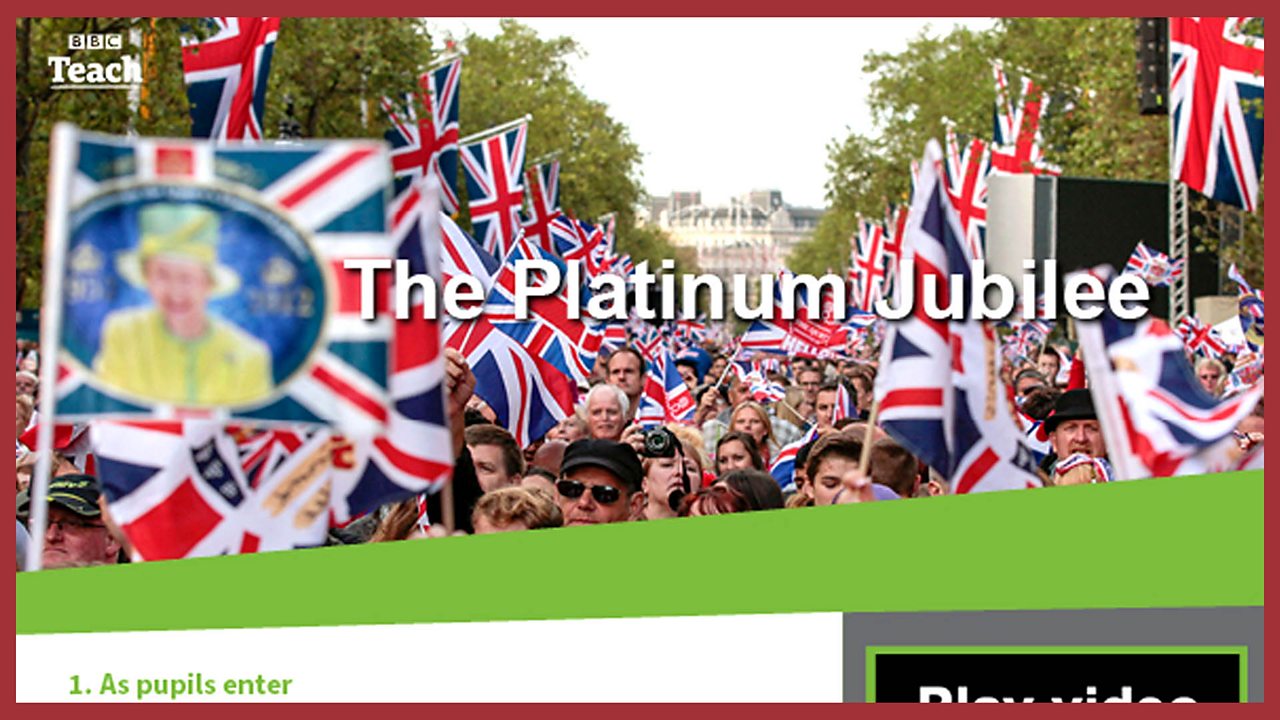 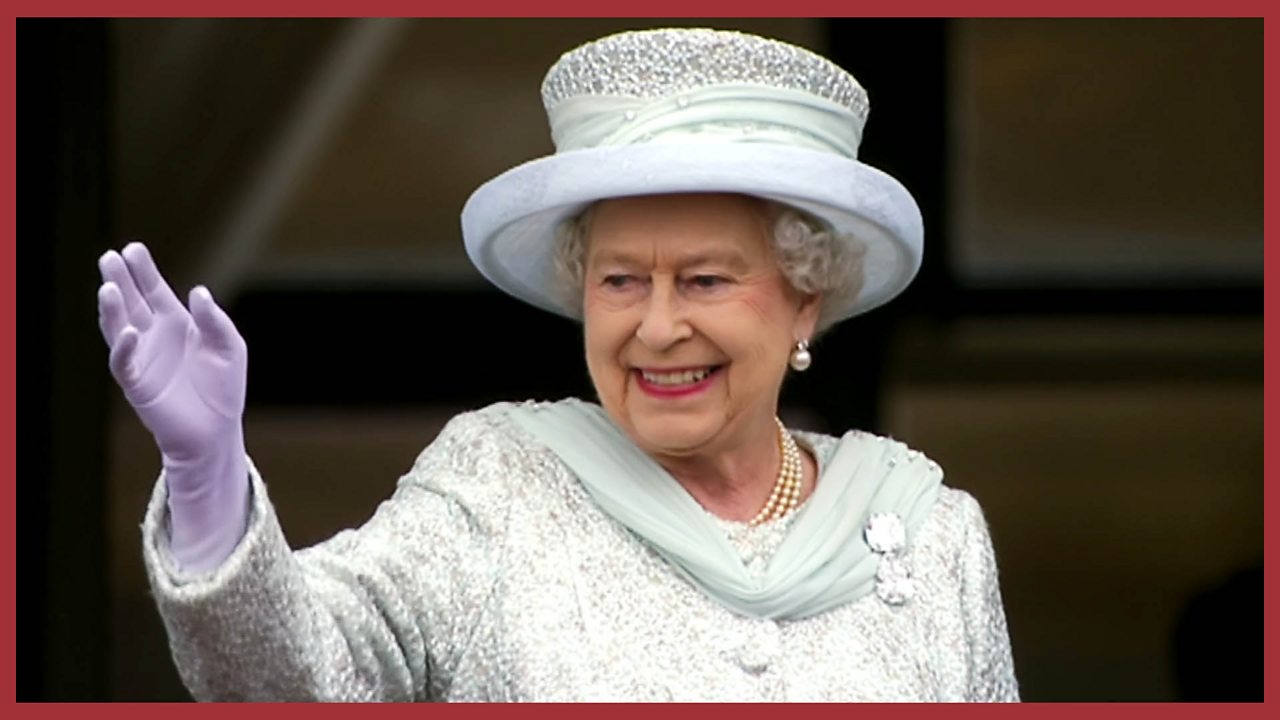 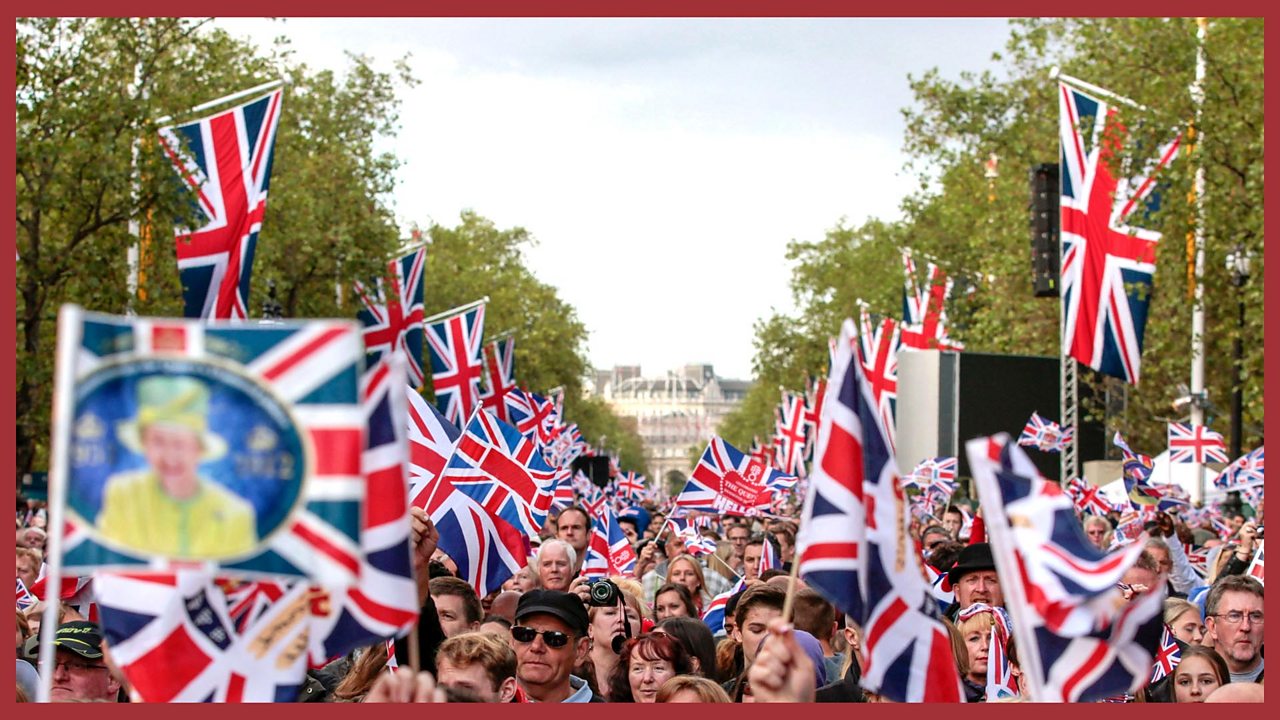 2. Introduction.Ask the assembly to think of some changes that have taken place in their lifetimes. Share some responses. Continue by explaining that this year we are marking the 70-year reign of Queen Elizabeth II with a celebration called the Platinum Jubilee. Much has changed in the UK during those 70 years. While pupils watch the video about the Queen's reign ask them to think about the changes included in the film.

3. Play the video.The duration is 5' 01" and the final words are: '...our very special monarch, Her Majesty Queen Elizabeth II.'

4. After the video - time to talk.Ask the assembly some or all of the following questions to consolidate their memory of the film and their understanding of it:

Then tell the assembly: Turn to the person next to you and tell them how you would like to celebrate the Platinum Jubilee. (You may wish to refer to any specific plans the school has).

5. Opportunity to sing.Suggestions from BBC collections below.

6. Opportunity to reflect.Sit quietly now as we think about some of the things we've found out about today...There have been many changes in the UK during the long reign of Queen Elizabeth II...Think about what we heard about life in the 1950s, when Elizabeth became the Queen... And then think about some of the changes over the last 70 years... And how your life now compares to children 70 years ago...Why is change important..?What things you would like to change..?Imagine 70 years into the future... What sort of world would you like it to be..?

7. Opportunity for prayer.Begin with your usual form of address ('Dear God', 'Let us pray', 'Lord...', etc) and:We thank you for the long reign of Her Majesty Queen Elizabeth II.As we celebrate the Platinum Jubilee, help us to appreciate the many changes for good that have taken place during the Queen's reign.And give each of us the strength to work for further change, so that together we make the world a better place for all.Amen.