Summary: The word 'respect' comes from two Latin words: 're' meaning 'back' and 'specere', meaning 'to look'. So the meaning of our modern word seems to have developed from an idea of looking back at, regarding, or considering someone or something. Today, the word means 'to value someone highly for what they say or do' or 'to treat people politely and thoughtfully, to show we value them.'

Pupils Amelie and Shaeya interview children and adults from their school community to find out what the word 'respect' means to them. Their interviewees offer different ideas on the word, including: 'showing tolerance', 'listening to others', 'being open to their opinions and beliefs', 'treating others as equals', 'playing by the rules', 'being polite to others' and 'being loyal to your friends'. All the interviewees agree that it's important to treat others with thoughtfulness and consideration, in just the way that we would wish to be treated ourselves.

End of speech: '...treat others how we'd like to be treated ourselves.' 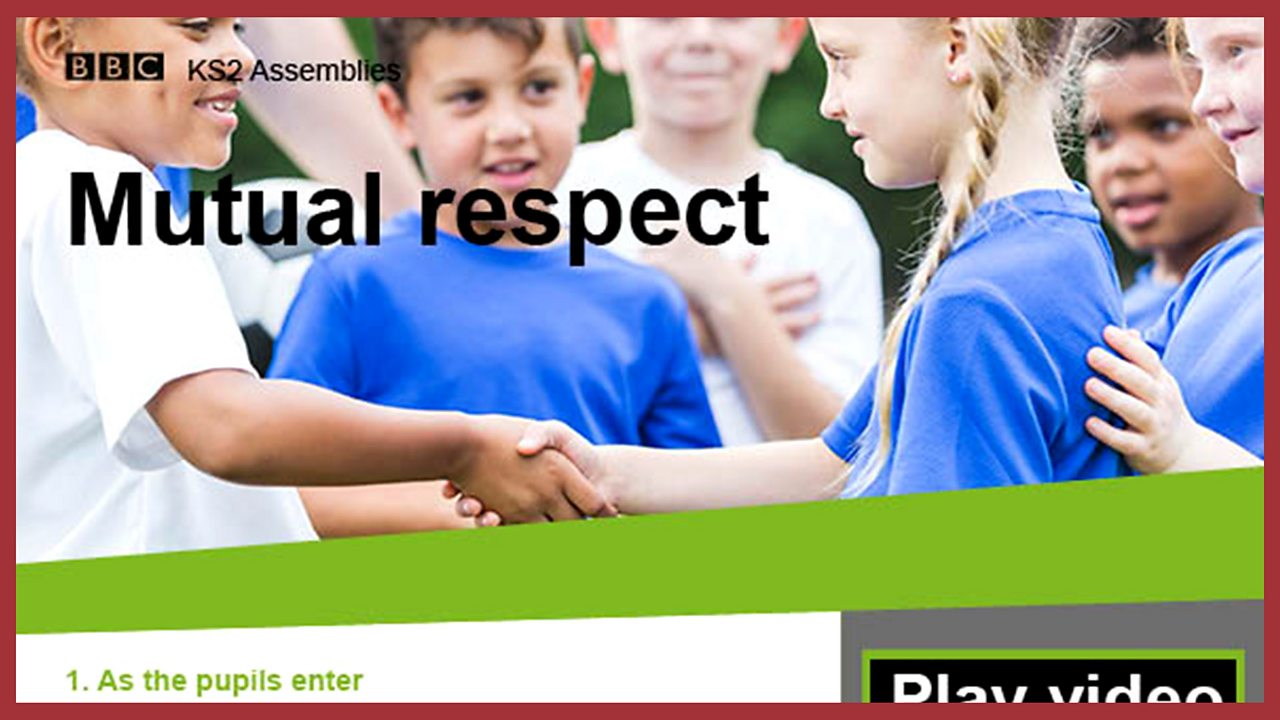 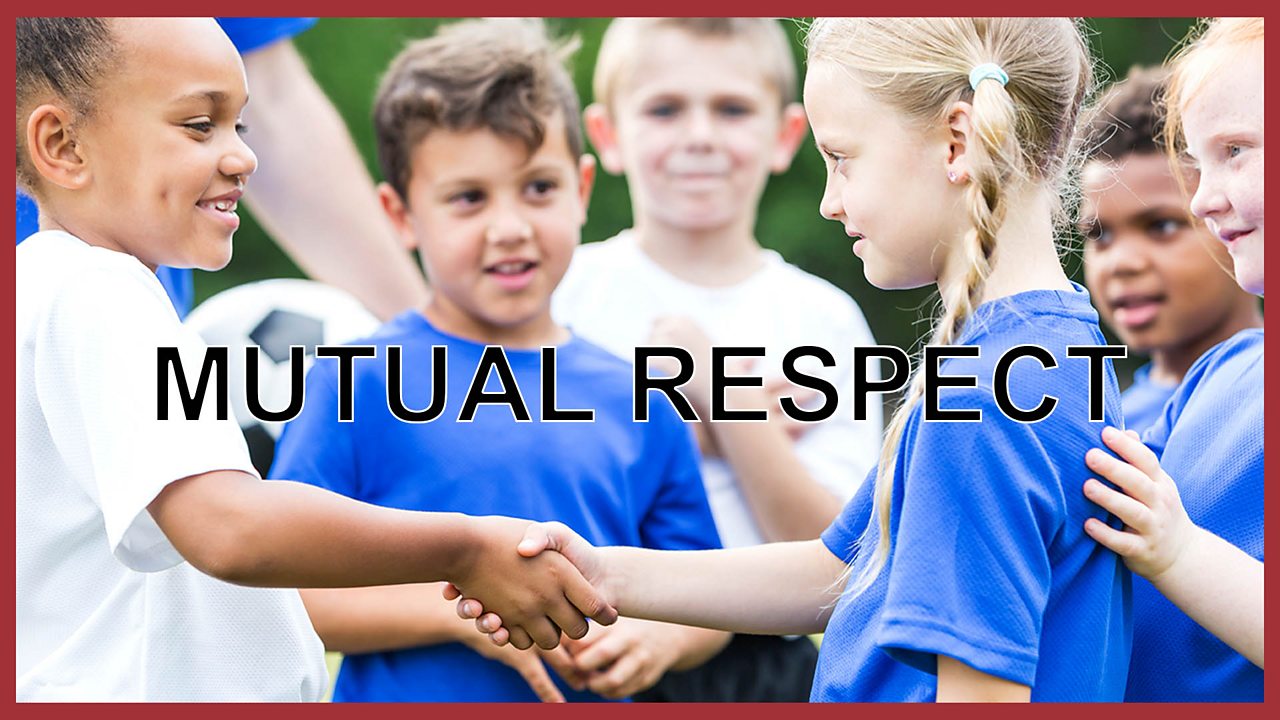 Click to display the image of two girls shaking hands

1. Entry music You might choose the 1967 Aretha Franklin song 'Respect' as a lively opener to your assembly.

2. Introduction Display the image of two children shaking hands before a football match with the words 'Mutual respect' (see 'Key links'). Ask two pupils to come to the front and model this moment. You could build up to it, with the two pupils doing a warm-up and some stretches. Encourage other pupils to make suitable crowd noises, or ask a pupil to provide a commentary: 'The teams have run out on the pitch. They're lining up. The captains step forward...' Take the improvisation to the point when the captains shake hands and blow a whistle to signal the game is about to begin. Now ask: 'Why do players shake hands before a match?' Gather the children's opinions. Establish the handshake is a way of showing you intend to play fairly and value your opponents. Tell the assembly: 'A handshake is a mark of respect. And mutual respect - respect between one another - is what today's assembly is about.' Indicate the words 'Mutual respect' on the display image. Explain: 'The word mutual means shared between people'. Now ask: 'But what does respect mean? It's a word you hear a lot, especially in school. What does respect mean to you?' Gather and list the children's suggestions. Tell them: 'Here is what pupils Amelie and Shaeya found out when they asked people in their school community what respect means to them.'

3. The video Play the video. The duration is 4' 28" and the final words are: '...treat others how we'd like to be treated ourselves.' As the clip unfolds, note down any key words in a list the children can see. These might include: 'tolerance', 'understanding', 'treat others well', 'dignity', 'loyal', 'listen' and 'equal'.

4. After the video Remind pupils that respect is 'mutual' or shared between people. Invite them to shake hands with one another to share some mutual respect.

5. Time to talk Lead a discussion on respect, using the following questions as prompts. Add to your list of keywords as the children give their contributions. 'When is it easy to show respect?' 'When is it harder to show respect?' 'What do you need to do to show respect?' 'What is self-respect?' 'Do you have to earn respect? And if so, how do you earn it?' As a final challenge - a task pupils can take away and bring to another assembly - you could ask children to come up with an acrostic poem using any of the words you have listed, with the title 'The rules of respect'. It might look something like this, and you could share this verse as a model for what to do. 'REACH out to others and try to understand, EVERYONE deserves respect, it's a mutual, so shake hands. SPEND time listening to someone's point of view. POLITENESS should be at the heart of everything you do. EVERYONE is equal, always keep that fact in mind, CARE for others and be considerate and kind. TREAT others just the way you want to be treated too. RESPECT others and they will RESPECT you!' You could later make a display of the pupils' acrostic verses in the assembly hall.

6. Opportunity to sing If your assembly is to include a song this would be a good time for it. Suggestions from BBC collections below.

8. Opportunity for prayer Use your standard form of address (Dear God, etc) and: ‘We thank you for giving us the patience and understanding to reach out to others and treat them with dignity and respect. Help us to remember that everyone is equal, to value other people, and to treat them well, just as we wish to be treated. Amen.'