What has swimming great Michael Phelps got to do with curling?

On the surface not much, but turn water into ice at an iconic Olympic venue, and it is a different story.

The 10-lane pool where the American won eight gold medals in 2008 has been transformed into a four-track curling rink for the 2022 Games as Beijing prepares to become the first city to host both summer and winter Olympics.

It is not just the Chinese capital that is swapping sporting seasons; there are athletes trading trainers for skates as they pursue a dual Olympic dream.

With 100 days to go before the action gets under way on 4 February, we look at how some familiar places and faces are getting ready for the biggest winter sports event.

From Water Cube to Ice Cube

Beijing will be reusing five of its venues from the summer Games as part of its sustainability aims.

One of the most memorable from 2008 was the Water Cube - a box-shaped building, clad in a honeycomb of transparent cushions and lit up in blue that hosted the swimming, diving and artistic swimming.

The big bubble-wrapped box had its facilities, lighting and ventilation renovated to become the curling venue, and once the Games are over it will switch seasonally between an aquatics and ice venue. 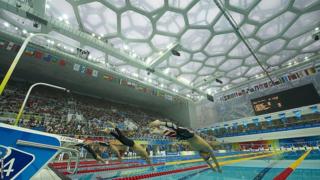 The other key venue from 13 years ago, the Bird's Nest stadium, will also get another Olympic appearance when it hosts the opening and closing ceremonies.

At the summer Games, this was where the athletics took place as well as the ceremonies that included the handover to London 2012 featuring David Beckham and a double-decker bus. 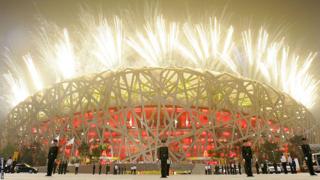 The Birds Nest hosted extravagant opening and closing ceremonies in 2008

Ice hockey will be taking place at two of the venues used in 2008 - the National Indoor Stadium that hosted rhythmic gymnastics, trampoline and handball and the Wukesong Sports Centre that was home to the basketball.

Short-track and figure skating is being held at the Capital Indoor Stadium, where volleyball was played in the summer Games. 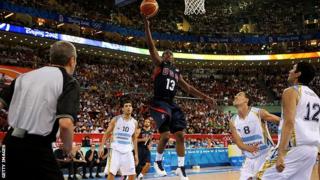 The United States won men's Olympic gold in basketball at the Wukesong Indoor Stadium in 2008...

There is one new venue in the existing Olympic Park, where the National Speed Skating Oval - nicknamed 'The Ice Ribbon' - now stands on an area that was formerly used for hockey and archery.

The only other site being used in Beijing is the new Big Air Shougang, which is on a former steel mill site away from the Olympic Park, while the sliding, skiing and snowboard events take place at two other hubs linked within an hour by rail from Beijing.

The Beijing 2008 venues are very familiar to British long jumper Greg Rutherford, who reached the final in the Bird's Nest on his Olympic debut four years before winning gold in London.

If things go to plan, he could be in a bobsleigh this time round having been named in one of the Great Britain bobsleigh squads that will attempt to qualify for the Games.

While still relatively uncommon, there are enough precedents of athletes switching between summer and winter Games for this to be a realistic prospect - although no Briton has won medals at both.

Another member of Britain's bobsleigh squad, Montell Douglas, is also hoping to compete in Beijing again, having raced in the women's 100m in 2008.

Canadian Vincent de Haitre is taking the switch to another level, though, as he aims to compete in Beijing just 180 days after appearing at the Tokyo Games.

Already a dual Olympian, having competed in speed skating at Pyeongchang 2018 before track cycling in Tokyo, the 27-year-old has a year less than normal to make the transition from summer to winter after the coronavirus pandemic delayed the summer Games by a year.

He is the first athlete to attempt to do this in such a short time, although up until 1992 winter and summer Games were held in the same year so there are athletes who have competed at both in the same year.

"Doing sport is inherently a painful activity - your heart-rate goes so high you taste blood, your legs burn, your back is sore all the time, your knees hurt, you have to see the physios almost twice a week.

"It's choosing effort and hard effort on a day-to-day basis and you've not had a chance to just not do anything.

"I have earned the respect of my team-mates [in both sports] by challenging myself with something very few have ever done and no-one has done it in this time frame.

"This has definitely been the most challenging thing I've had to do in my athletic career. At the moment getting to the Olympics is the goal, but once there just being there is not the goal any more, it's to be competitive."

From stopping rain to creating snow at venues

It is not only the indoor venues and some athletes who have been transformed from summer to winter.

With Beijing's average temperature in February above freezing and winters generally dry, the obvious challenge for a Winter Games is a lack of snow.

Zhangjiakou - which is hosting most of the ski and snowboard events - averages eight inches of the white stuff per year, while Yanqing - home to the sliding and alpine skiing - gets just two inches.

The answer, obviously, is fake it.

It will not be the first time Beijing has used manmade weather to combat the natural conditions at a Games, with the Chinese government having seeded the clouds before the 2008 opening ceremony to create a downpour elsewhere and keep the stadium dry.

That involved firing rockets packed with silver iodide crystals into rain clouds over the suburbs of Beijing.

This time it will be snow cannons firing super-cool water from reservoirs and lakes to eject ice crystals and create pistes on the slopes.

Beijing is not the first winter Games to lack snow - Pyeongchang 2018 and Sochi 2014 both used artificial snow and even Vancouver in 2010 had trucks of it being brought in to the melting Cypress Mountain venue.

Remember the words of the International Olympic Committee at the time of the Chinese bid for the Games: "Due to the lack of natural snow the look of the venue may not be aesthetically pleasing."

There is, perhaps, a silver lining in that (snowless) cloud - it could be a quick switch back to summer sports again afterwards.