On Lorraine Denman's left forearm is a tattoo depicting her daughter.

Ellie Soutter stands with her arms aloft, the waters of a French lake lapping around her legs - looking out into the distance.

"It was one of her favourite pictures," Lorraine says. "I see happiness, I see freedom."

Ellie, one of Britain's most talented young snowboarders, was tipped for success at the Beijing 2022 Winter Olympics.

"Life is completely empty," Lorraine says. "I have a massive void in my life.

"It's like having the battery taken out of me. There's nothing there and I'm just running on empty."

Ellie won bronze at the 2017 Youth Olympic Winter Festival in Turkey and carried the British flag at the closing ceremony. But, as her father Tony has previously told the BBC, "funding played massively" on her mind and that pressure took its toll.

In the days leading up to her death, Ellie - due to attend a training camp - had missed a flight, and as a result, felt she had "let everyone down".

"Ellie was the other half of me," Lorraine tells BBC Breakfast's Sally Nugent in an interview broadcast on World Mental Health Day. "She was very strong, very passionate about her own thoughts. She was very driven and she was very articulate.

"She knew what she wanted, even from an early age. She had her own ambitions and her own drive."

'I just fell to the floor'

Lorraine spoke to Ellie the day before her birthday, a conversation in which Ellie had told her about the missed flight.

"We managed to get things into line, we were talking and I said to go home, to enjoy her evening and I would give her a call the next day."

Alarm bells rang when neither Lorraine, nor her father, nor any of Ellie's friends, could get hold of her on her milestone birthday.

"As a mum, I knew something wasn't right," Lorraine says.

A veterinary nurse in Hove, she left work early. As the day went on, and Ellie's phone remained unanswered, police in Les Gets - the French village where she lived with her father - were called and search parties deployed.

"He didn't answer and then he called me back," she says.

"For a split second, I thought she was alive. And then he said: 'She's dead'. He said: 'Lorraine, she's dead.'

"I got out of bed and I just fell to the floor. Someone might as well have just taken my heart out." 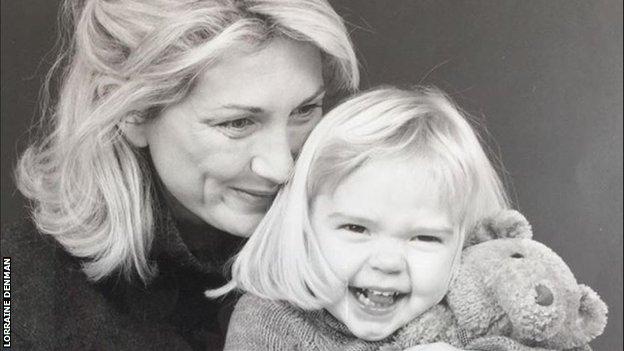 That night, Lorraine and her husband walked the streets for five hours. Where they went or what they saw, she has no recollection.

Fifteen months on, she takes time to hold Ellie's ashes and talk to her daughter every day. The tattoo on her arm, she says, allows her to feel close to her only child.

"Sometimes, I've heard stories, be it on the news or I've read it in the newspaper, of other people who have lost their children, and I think 'those poor people'," she says.

"Then all of sudden, it hits me. That is me. I am one of those people."

Ellie, according to her mum, "was a worrier".

Yet from the outside, Ellie looked anything but a worrier. And that, for Lorraine, is what needs to be "recognised".

"As parents, we have to take that as a responsibility as well, because it was easy for us to turn around and say 'Ellie, you've got nothing to worry about, everything is going to be fine, you've got so much to look forward to, you've got this coming up, you've got that', but actually, I think people have to listen and read between the lines." 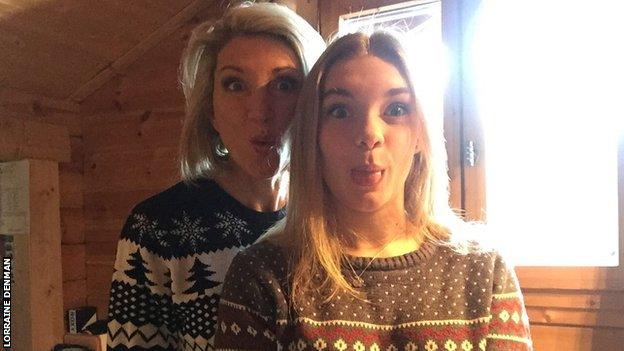 Lorraine adds: "You can't wrap your children in cotton wool, they are people and they've got minds of their own, but you can have time to sit and listen to them, or just take on board if they have said something to you, don't just disregard it."

In the days after Ellie's death, her parents established the Ellie Soutter Foundation in order to help young winter athletes "achieve their potential and dreams" and to help end the "vicious cycle" around young athletes' funding.

On a personal level, Lorraine has now found the inner strength to tell her daughter's story, in the hope it can help others. Ellie's death, she says, "can't be in vain".

"I am a voice for Ellie now, and I have to move forward and make other people aware that she couldn't say how she felt for whatever reason, but I can now encourage people to speak up, to share or to talk to their parents or their friends if they are having any problems, and I think that is what is pushing me on.

"Have I wanted to give up? Quite frankly, yes. What is the point in living without her anymore? But equally, she is me and I am her.

If you or someone you know has been affected by a mental health issue, help and support is available at bbc.co.uk/actionline