With the 2018 Winter Olympics in Pyeongchang, South Korea, just two months away, BBC Sport brings you a weekly round-up of the big stories.

Vonn fell to the ground in pain after crossing the finish line and withdrew from Sunday's race at the Swiss resort - which was subsequently cancelled because of bad visibility.

She later indicated her injury was not serious but stressed the need to take care of herself in the build-up to Pyeongchang. 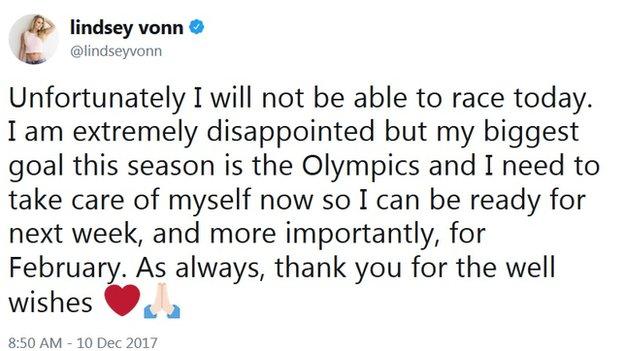 Marcel Hirscher defied difficult conditions to win Sunday's slalom at Val d'Isere, demonstrating that he is back to his best after recovering from a broken ankle.

The Austrian could have also won Saturday's giant slalom but he became entangled with a gate flag and had to settle for third place, allowing his French rival Alexis Pinturault to claim the win.

BACK TO SCHOOL FOR MUSGRAVE

He was disappointed with the result saying: "I started off a bit hard today and paid the price on the last lap. I am a bit disappointed with 16th place, but have another couple of distance races coming up to make up for it."

He did not have much time to dwell on his performance however, as he sat his engineering exams on Monday!

The event is the biggest before the Winter Olympics, although two-time world champion and Olympic favourite Evgenia Medvedeva was a notable absentee, with the Russian withdrawing because of a broken bone in her foot.

The 15-year-old Zagitova, who last year won the Junior Grand Prix Final, overcame several wobbles on landings to win with a jump-laden routine to "Don Quixote."

"There were a number of small mistakes but they weren't that big a deal," Zagitova said.

The other records went to Japan's Nao Kodaira, in the women's 500m, and the Japanese pursuit team.

SKELETON: Lizzy Yarnold's poor run of results continued with a 13th place-finish at the World Cup skeleton event in Winterberg. Her British team-mate Laura Deas finished seventh in the race, which was won by world champion Jacqueline Lolling of Germany.

Olympic champion Yarnold was not helped by suffering the worst of the weather conditions at the German track, which led to the men's race being cancelled after one run.

That meant South Korea's Yun Sungbin, the leader after the first run, won his third consecutive race to extend his lead at the top of the overall standings.

BOBSLEIGH: Great Britain's four-man team, piloted by Lamin Deen, ended joint-ninth in the fourth round of the World Cup season.

That result leaves them fourth in the overall standings, with Germany's Johannes Lochner extending his lead courtesy of victory in Winterburg.

Elsewhere, Nigeria's women's bobsleigh team are on the brink of qualifying for the 2018 Winter Olympics.

Meanwhile, former bobsledder Aleksandr Zubkov is amongst 22 Russian athletes who have appealed to the Court of Arbitration for Sport after being given life bans by the International Olympic Committee for doping offences at the 2014 Winter Olympics.

Last month Zubkov was stripped of the two-man and four-man gold medals he won in Sochi.

CURLING: The final Olympic qualifying event in Pyeongchang saw the last two men's places go to Italy and Denmark, while China and Denmark came through the women's competition.

BIATHLON: Norway's Johannes Thingnes Bo claimed his third and fourth World Cup victories of the campaign by triumphing in the men's sprint and pursuit events in Hochfilzen, Austria.

The 2018 Winter Olympics take place in Pyeongchang, South Korea, from 9 to 25 February. You will be able to follow live BBC Sport coverage of the Winter Games on TV, radio and online.