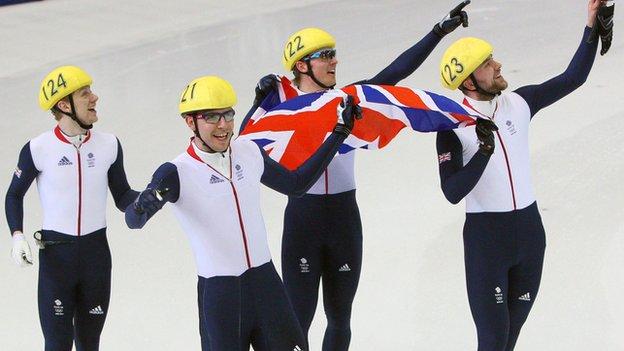 Whelbourne overtook to take the lead on last lap before falling and crossing the line on his bottom.

It was the first British medal for male skaters at a World Championships since 2008.

"I tried my hardest on that last bend and I thought I had the gold," Whelbourne said.

"I went past all three of them in the last quarter of a lap, but there was a bit of argy-bargy and I went down.

"But I'm pretty happy to finish the season on the podium, especially after a bit of back luck in my individual events here. We definitely showed everyone that we are one of the best teams in the world."

Meanwhile, Elise Christie was fourth in the 1,000m final as South Korean Shim Suk-Hee added to her 1500m title.

The Scot, who was fifth in the 1500m on Friday, was penalised in all three of her events at the Winter Olympics in Sochi.

In the 1,000m, Charlotte Gilmartin reached the quarter-finals, while in the men's event, Whelbourne and Shoebridge failed to advance beyond the 1,000m heats.