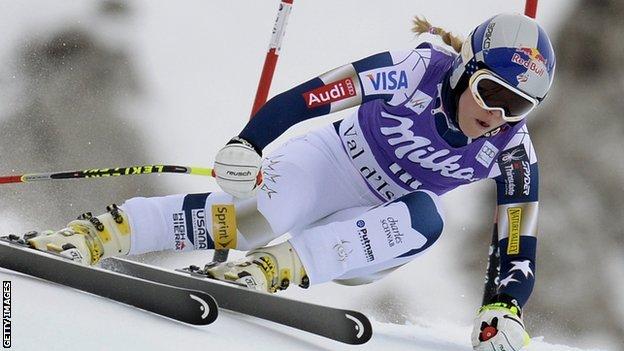 The Olympic champion had returned after 10 months out with a serious knee injury suffered in last February's World Championships in Austria.

The American still intends to defend her Olympic title at Sochi in February.

The four-time overall World Cup champion only returned to training in September, and in November partially tore the anterior cruciate ligament (ACL) in the same knee.

But Vonn insisted this latest setback would not have major ramifications, saying she would race a maximum of two more events before heading to Sochi for the downhill on 12 February.

In Saturday's race - won by Switzerland's Marianne Kaufmann-Abderhalden - the American's knee gave out on a turn coming out of a compression and she missed a gate before coming to a stop at the side of the slope.

Vonn added: "Unfortunately I have no ACL and it just gave out on me.

"It was a small compression and it was fully loaded on the right ski and my knee just completely gave out. I tried to pressure the ski again and it gave out again.

"Unless I get surgery there's not anything really magical I can do to make it better. I can just get my leg and muscles stronger to try to support it more, but that has a small impact."

But she insisted that her morale remained high and that Sochi was firmly in her sights.

She continued: "My goal is the Olympics. I'm not winning any World Cups this year, any titles, as long as I'm skiing well and I have good confidence that's all I really need.

"I just need to be careful about how many races I do."