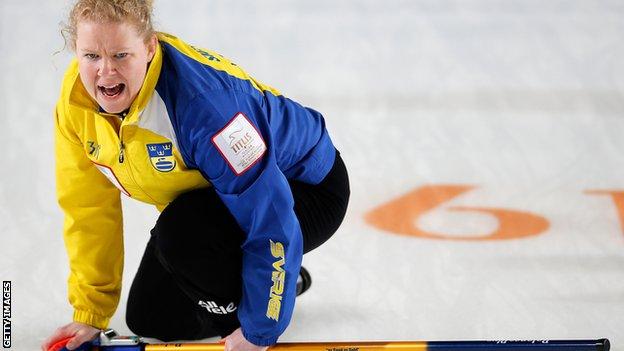 Sweden, skipped by Margaretha Sigfridsson, put an end to Scotland's unbeaten run at the European Curling Championship to win the women's title.

Eve Muirhead's Scots had including a 6-5 win over the Swedes.

Skip Muirhead said: "It's not the end we wanted, but it's not the big one - the Winter Olympics is our big goal."

She thought that "it's a great stepping stone towards that".

The Swedes had finished third in the round-robin and had to beat Denmark and Switzerland to reach the final.

Muirhead's side were lying in wait,

However, Sigfridsson's rink took control of the final at the third end in Stavanger when they scored three to take a 4-1 lead.

The Scots fought back to level by the sixth end at 4-4, but the Swedes scored two at the next end to re-establish the upper hand.

With time running out on the Scots' play clock, Sweden finished with a flourish by scoring three at the final end to secure the title.

"You're gutted, because when you get to the final, you want to come away with the gold medal," Muirhead told BBC Scotland in Stavanger.

"We just didn't seem as sharp as we have been all week, but to give them their dues, they played great.

"But we can take so much out of this week. Going unbeaten to the final, we've played so, so well; the girls have been fantastic."

Barely had Muirhead stepped off the ice at the Sormarka Arena than she was already thinking ahead to February's Olympics, where she and her rink will represent Team GB.

Four years ago in Vancouver, Team GB under Muirhead, then only 19, were unable to make the medal play-offs, winning only three of their nine round-robin matches.

In the intervening years, she has won gold at both European and World level and feels that kind of experience will stand her rink in good stead in Russia.

"So we're going to go there with our heads held high and play the best we can play.

"I can't wait for the Games to come round. We just need to put defeats like this to the side and learn from the mistakes so we don't do them again."

Muirhead admits that falling just short in Norway will make the team redouble their efforts in order to do well in Russia.

"When you come home with a silver medal, all you want is gold," she said.

"It's really going to push us. We know we're going to have to work harder now.

"We're obviously still chasing at some people's tails and not the best just yet.

"So we're going to go home, train hard and give everything towards Sochi."