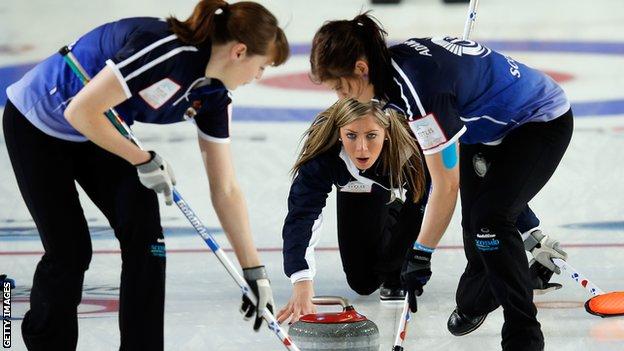 Scotland have swept Switzerland aside for a second time this week to reach their fourth European Curling Championship final in a row.

Eve Muirhead's rink defeated Mirjam Ott's Swiss side 10-3, having already defeated them 13-3 in the round-robin.

The winning skip told BBC Scotland in Norway: "To get to another European final feels fantastic.

"But we don't play these finals for silver. Once we get to the final, you push as hard as you can for gold."

Switzerland have another chance to reach the final when they face Maria Prytz's Swedes in the semi-final.

The Scottish rink of Muirhead, Anna Sloan, Vicki Adams and Claire Hamilton will go into the final as strong favourites to take the gold medal after completing the round-robin without a defeat, winning all nine games before the triumph in their first versus second play-off against the Swiss.

"We all played really well out there and it's one of those games that you go and beat them in the round-robin and the last thing you want to do is slip up in the play-off stages," said Muirhead.

"At the start of the week, you have to just ease yourself in and, when you get to the play-offs, you really have to step it up - and that's what we've done."

Sweden, who had finished third in the round-robin, defeated Lene Nielsen's Danes 10-2 in their play-off.

Denmark had earlier beaten Anna Sidorova's defending champions from Russia in the fourth versus fifth play-off, but it is Sweden who face the Swiss in Friday night's semi-final.

"Everyone left knows how each other plays, but when you're unbeaten in the round-robin and you have a really strong 1v2 game, it stamps down a good marker," said Muirhead.

We're enjoying it out there and, if we keep playing the way we're playing, hopefully we'll get the gold

"It's a European final. It's not going to be easy. We're going to go into the games expecting it to go down to the last end and the last stone."

Vice-skip Sloan says that, despite being unbeaten in 10 games, the team must remain focused if they are to add to the European title they won in 2011.

"This is the fourth consecutive European final for Eve and I," she said. "We've got three silvers and one gold, so we definitely want to the right colour this year again."

If the Swedes progress, it would represent a rematch of the world final the Scots won in March, while a final against the Swiss would be the third match in three days against Ott's rink.

"They say the hardest thing is to beat a team three times in-a-row," added Sloan.

"But we're enjoying it out there and, if we keep playing the way we're playing, hopefully we'll get the gold."