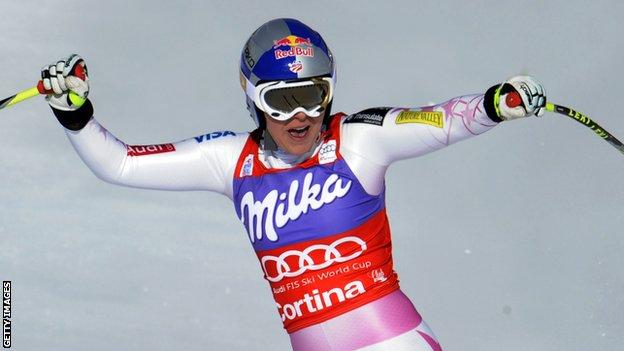 Olympic gold medallist Lindsey Vonn is back in action seven months after rupturing her cruciate ligaments in her right knee.

The 28-year-old crashed on the opening day of the Alpine Skiing World Championships in Austria in March.

Scans revealed the rupture of the cruciate and medial ligament as well as a fracture of the tibial plateau.

"I'm on the road to Sochi and I'm not slowing down!" she announced on her official Facebook page.

The 2014 Winter Olympics gets under way in February where she will be looking to add the downhill gold she won at the Vancouver Games in 2010 and the bronze she took in the super-G.

Vonn made her World Cup debut aged just 16 in 2000 before competing at the 2002 Winter Olympics in Utah. In 2008, she claimed her first World Cup title to become only the second American woman to lift the trophy.

Her request to compete in a men's World Cup downhill ski race was rejected by the International Ski Federation (FIS) last year.