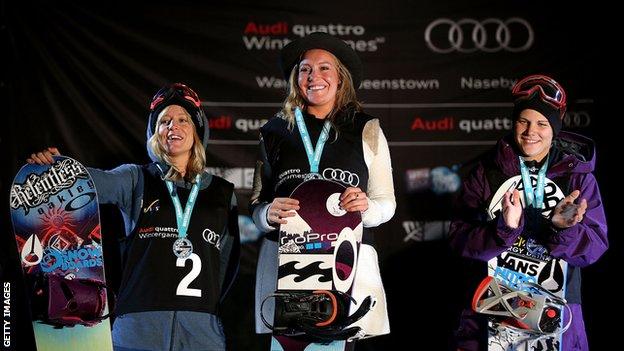 She scored 87 points to finish behind American Jamie Anderson's 97.45 in fog at the season's first World Cup.

"I was so relieved to stay on my feet and make it past qualifications," said Jones, 33.

"Putting down my run in the finals in such harsh conditions and finishing second has put a huge smile on my face."

Bristol-born Jones is a three-time X Games gold medallist but has never competed in a Winter Olympics because slopestyle, where riders head down a course with rails and jumps and are marked on the difficulty and execution of their tricks, has not been in the Games.

But it will be making its debut in Sochi next February, with Britain among the medal contenders in both ski and snowboard slopestyle.

Alongside Jones, fellow rider Billy Morgan has already finished on the World Cup podium, in Sierra Nevada last season, although his final in New Zealand was cancelled because of the fog.

Freestyle skier James Woods is the world number one and competes later this week.

Katie Summerhayes is recuperating after having a second operation on her cruciate knee ligament but will be fit for Russia.