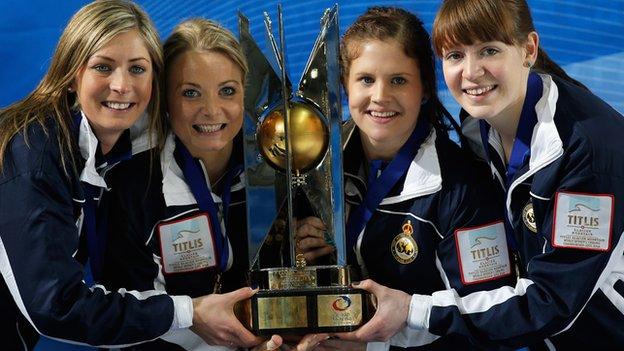 Scotland have been crowned women's world curling champions after beating Sweden 6-5 in Riga.

All the girls have played unbelievably and to come out as world champions feels great!

"It feels amazing," skipper Eve Muirhead told BBC Scotland. "We knew if we played the way we could play, we'd be close to a medal.

"It's been one of my lifetime dreams to become world champion. It shows you so much hard work finally pays off!"

Sweden, who had beaten Scotland twice earlier in the tournament, went into a 2-0 lead after two ends but never led again after the Scots turned it round to 3-2 after four ends.

"When you get to the final, you don't really want anything other than the gold medal and being world champions doesn't happen very many times in your life," said Muirhead, who had lost to Germany in her previous World Championship final in 2010.

"All the girls have played unbelievably and to come out as world champions feels great."

The Scots defeated Canada 8-7 in Saturday's semi-final to set up a third match versus Margaretha Sigfridsson's rink.

The previous losses to the Swedes had been the only reverses for the Scottish team in Latvia.

Scotland had finished the round-robin stage in second place, with 10 wins from their 11 ties. They take the title from Switzerland, who won in 2012.