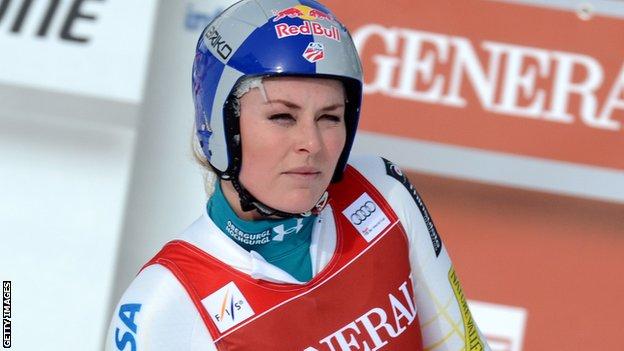 Lindsey Vonn has won a record sixth straight World Cup downhill title, despite a season-ending knee injury five weeks ago, after the final race was cancelled because of thick fog.

That meant Vonn retained her title by one point from Tina Maze of Slovenia.

Vonn was denied a fourth overall title in a row in 2011 by similar conditions at the same Lenzerheide venue.

Everything in life comes back around. #believe #karma #onelegvictorydance

"I won the World Cup Downhill title! 6 in a row with a bum knee," the American wrote on Facebook.

Vonn, 28, ruptured cruciate knee ligaments and broke her leg at the World Championships in February when she crashed during the women's super-G event.

The Colorado-based skier won gold in the downhill event at the 2010 Winter Olympics in Vancouver and also took bronze in the super-G.

Two years ago the season-ending giant slalom was cancelled and Vonn lost the overall title by three points to Maria Hoefl-Riesch of Germany.

"Everything in life comes back around. #believe #karma #onelegvictorydance,'' wrote Vonn, whose run of downhill titles is a record in the 47 seasons of men's and women's World Cup racing.

Maze, who had already won her first overall title with a record points total, wrote on Twitter: "I guess the DH globe belongs to someone else. Congratulation Lindsey! What goes around comes around!''

Hoefl-Riesch, who had a slim chance of beating Maze in the downhill standings, also sent a message to Vonn on Twitter.

"Congrats to lindseyvonn for the dh globe! Now you know how I felt 2 years ago,'' Hoefl-Riesch wrote.