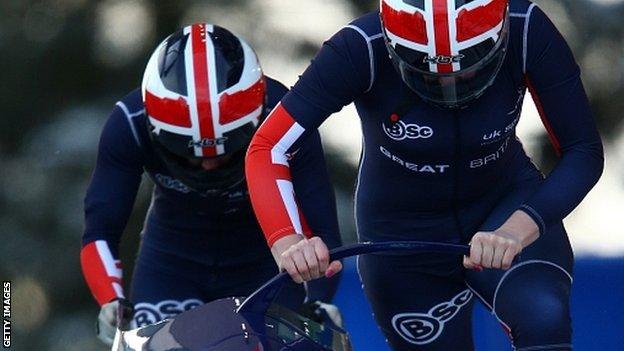 Great Britain bobsleigh pair Paula Walker and Gillian Cooke were unhurt after crashing on the second run of their World Cup race in Altenberg.

Walker and Cooke were on course for their first World Cup podium place of the season, having finished the first run in third place.

But their sled overturned on the penultimate bend and they crossed the line upside-down before walking away.

"We all want this so bad, we will pick the positives out of this later."

Britain's Lizzy Yarnold narrowly missed out on her third World Cup podium of the season when she finished fourth in the women's skeleton World Cup, also in Altenberg.

Yarnold improved from fifth place after her first run to finish 0.06 seconds behind third-placed Noelle Pikus-Pace of the US.

World Cup leader Marion Thees of Germany won the event with another US slider, Katie Uhlaender, in second.

Shelley Rudman, who won the World Cup race in Winterburg last month, finished in 17th place after suffering a bout of flu, while Donna Creighton was seventh.

Yarnold remains second in the overall standings behind Thees while Rudman is in sixth place.