Great Britain's Penny Coomes and Nick Buckland safely progressed to the final day of the ice dance competition at the Winter Olympics.

The pair scored 68.36 in the short dance and finished 10th, with the top 20 competing in Tuesday's free dance.

Briton Aimee Fuller, 26, fell on both runs in the snowboard big air and failed to make the final.

Coomes and Buckland are making their third appearance at a Winter Games, two years after Coomes smashed her kneecap into eight pieces and was told she would never skate again.

Coomes and Buckland will now compete in the free dance on Tuesday, starting at 01:00 GMT, with the medals awarded to the pairs with the highest cumulative score over the two dances.

Canada's Tessa Virtue and Scott Moir lead the standings after the short dance with a world-record score of 83.67.

"I'm so happy, relieved and overwhelmed to be here," Coomes said. "No matter what, we did it. I'm so proud of us and our team."

They finished joint-second and third in the final two runs on Monday. The competition begins on Tuesday at 11:50 GMT.

A mixed day on snow

Cheshire qualified for the halfpipe final in ninth place with a score of 74.00 while Canada's Cassie Sharpe topped the standings on 93.40.

The Briton missed the 2014 Games in Sochi after suffering heavy concussion in a fall and has since contemplated quitting the sport owing to anxiety.

Summerhayes, whose sister reached the ski slopestyle final, is competing at her first Games and could only manage a score of 66.00 to finish 17th.

Fuller came 25th after crashing on both runs of the big air, having also crashed in the snowboard slopestyle final, which was described as "too dangerous" owing to winds.

Austria's Anna Gasser produced the best score in qualifying, an impressive 98.00 on her second run.

Great Britain men's curling team moved up to joint third in the table with a 7-6 victory over Denmark after a thrilling last end.

The Danes led 6-5 but failed in their attempt at a crucial double takeout that would have taken the match to sudden death. It left GB skip Kyle Smith with the simple task of finding the house with his final stone, which he did for a crucial win.

Only the top four in the table progress to the semi-finals.

"It's all in our own hands and you can't ask for more than that," Smith told BBC Sport.

"A couple of wins and we'll be in a perfect place in the semi-finals."

They play Norway on Tuesday before their final match against the USA on Wednesday.

The British women are also still in contention for a semi-final spot after snatching a crucial 8-7 win over Switzerland.

Eve Muirhead's team scored two points in the 10th and final end for victory, with matches against Japan and Canada coming up. They currently lie in joint fourth place with USA.

The skip said: "It was a tough game. Both teams played really well. It was a game of inches. We stepped up a gear from yesterday and we want to take this into tomorrow [against Japan]." 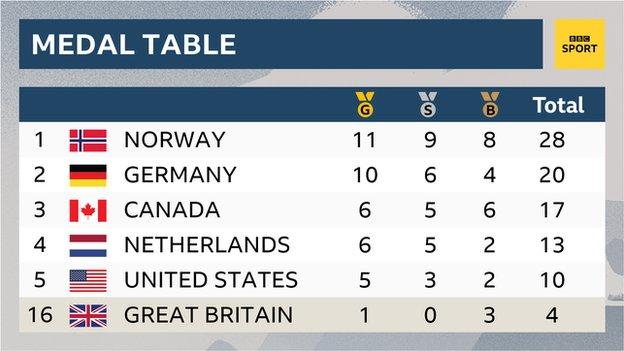 Great Britain's bobsleigh pilot Brad Hall said it was a "tough" night as "inconsistencies" cost him and Joel Fearon from building on the seventh position they held in the two-man event heading into the final two runs.

The pair finished in 12th, 1.43 seconds off the medals, but believe better is to come in the four-man event at the weekend.

"Twelfth is better than anything I've achieved at a World Cup so that has to be a positive," Hall said.

Fearon added: "I'm so proud of what Brad has achieved in a short space of time and tonight was a bit of an anticlimax after Monday, but we'll have the power of two more guys in the four-man and we think it'll be exciting - so tune in."

Other news from Pyeongchang