Team USA have acted "dishonourably" by tossing a coin to decide who would be their Winter Olympics flag bearer, a double gold medallist has claimed.

Speed skater Shani Davis appeared to criticise the decision on Twitter after luge slider Erin Hamlin was selected ahead of him for the role at Friday's opening ceremony in Pyeongchang.

He was the first black athlete to win individual Winters gold in 2006.

And the 35-year-old retained that 1000m long track title four years later, as well as winning 1500m silver in both Turin and Vancouver.

It was later announced that Davis would not take part in the opening ceremony.

A US Speedskating spokesman said Davis had not originally planned to march in the parade of nations, but would have made an exception if he had been chosen as flag-bearer.

"Shani won't march in the parade. It was never part of his plans. He is fully focused on his first race and is concentrating on that," the spokesman said.

Hamlin - who will race in her fifth and final Games - and Davis were among eight nominees for the flag bearer role.

They were tied at four votes each after an athlete from each of the USA's eight winter sports federations held a ballot on Wednesday.

It had already been agreed prior to the vote by the US Olympic Committee that a tie would be broken by a coin toss, and they later defended their selection method.

"As is always the case, there were many worthy candidates for this year's honour and we look forward to having four-time Olympian Erin Hamlin lead our delegation into the opening ceremony."

Speaking before Davis' tweet, Hamlin said her family would be thrilled to watch her carry the flag.

"They're really pumped," she said. "We've grown up watching the Olympics and we're always like, 'Who's going to be carrying the flag?' And to actually be that person is insane."

Hamlin's team-mate Jayson Terdiman added that it is "one of the coolest things".

US speed skater Joey Mantia, a team-mate of Davis, accepted the decision.

"We feel strongly toward Shani and they felt strongly for Erin," he said. "That's just that." 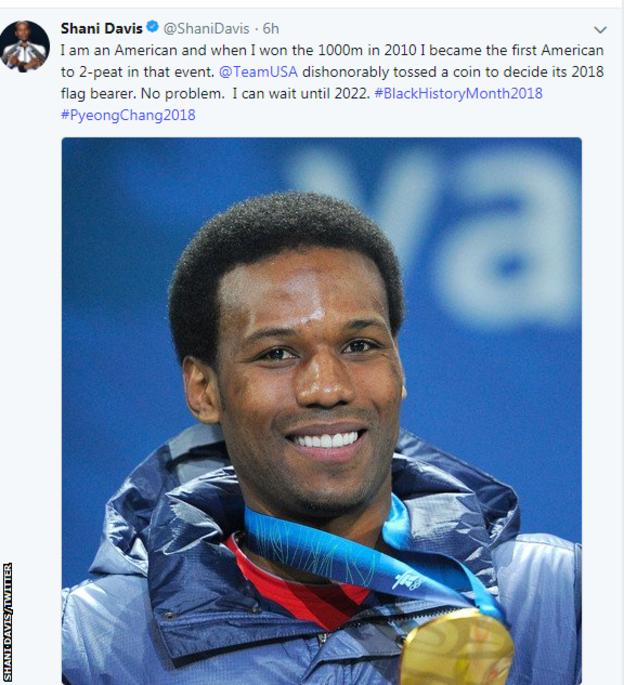