Meanwhile, there was drama on the slopes as American Lindsey Vonn missed out on a medal on her Olympic return.

Hanyu took a four-point lead into the final day and scored 206.17 in the free skating to extend his winning margin.

Hanyu's Sochi 2014 success elevated him to superstar status in Japan and, having overcome a three-month injury lay-off to make the Games, fans threw stuffed Winnie the Pooh toys on to the ice following his victory in Pyeongchang.

"I'm relieved to be able to skate here as a lot of people supported me," said the Japanese skater, who has adopted the famous children's character as his mascot.

"My right foot really hung tough. I worried a lot of people as I could not practice because of my injury. So, there was stronger support than before.

"I was so fortunate. I'm feeling gratitude. I was able to make a jump that I wanted to do with concentration. Anyway it was good."

American prodigy Nathan Chen saw his hopes of a medal disappear after a terrible short program on Friday, but set an Olympic record in Saturday's free skate.

The 18-year-old became the first figure skater to land six quads to record 215.08 points, one of the highest scores ever seen in the sport.

He eventually finished fifth, having broken his own record of five quads set last year.

"I have been working on it for a while. It's never really fully come together," said the teenager, nicknamed "Quad King".

"I was like, 'I already fell so many times (this week), I might as well go out and throw everything down and see what happens'."

'I am America's sweetheart'

American figure skate Adam Rippon, who came out as gay in 2015, says he will take some time to consider whether to hang up his skates after finishing 10th in Saturday's event.

The 28-year-old, who said last month he would not feel welcome if invited to the White House because he is gay, won bronze as part of the team competition earlier in the week.

"I think at first I need a five-minute break and a really stiff drink and then maybe, like a day or two off the ice, at least to dry out my costumes, and then we'll see," he said.

Rippon, who criticised US vice-president Mike Pence's record on lesbian, gay, bisexual and transgender rights before the Games, is a social media hit and puts it down to trying to "keep it real during interviews".

"That's exactly who I am, I have been completely honest with this whole Olympic experience. It is a once-in-a-lifetime opportunity," he added.

"And I wanted to be open and honest about it and fun with the media, it's a whole part of it that I wanted to enjoy and I enjoyed every single second - I am America's sweetheart."

Vonn is the second most decorated woman on the Alpine World Cup circuit with 81 victories, but the 33-year-old skied into soft snow after going out first and only set a time good enough for sixth place.

"One of the most astonishing Olympic stories of all time"

The snowboard world champion who won gold on borrowed skis

Czech Ledecka took the title by 0.01 seconds ahead of defending champion Anna Veith of Austria.

It was a result that surprised Vonn, competing at her first Olympics since 2010 due to injury.

"It's definitely shocking, in the Olympics a lot of weird things happen," said Vonn, the downhill champion in Vancouver eight years ago.

"Different people can jump in there that maybe wouldn't be in there before."

The American will have another chance to become the oldest female medallist in Olympic Alpine skiing in her favoured downhill on the same mountain next week.

Other medals on Saturday 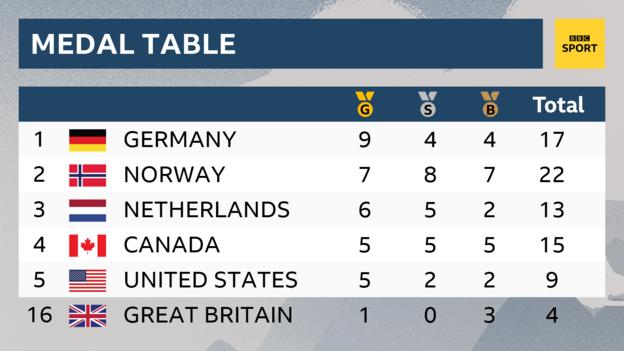 Other Games news on day eight