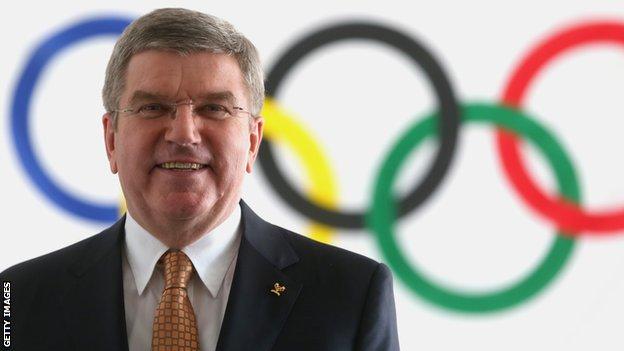 The IOC was criticised for allowing the Winter Olympics to take place in Russia after President Vladimir Putin introduced anti-gay legislation.

Their letter said no Olympics could be "truly successful" where "state-sponsored discrimination" existed.

"Any form of discrimination with regard to a country or a person on grounds of race, religion, politics, gender or otherwise is incompatible with belonging to the Olympic Movement."

Principle 6 of the IOC's fundamental principles of Olympism

The letter is timed to coincide with the final weekend of the Sochi Winter Olympics.

The letter read: "As Russia's controversial Winter Games come to a close, we write to you to ensure that future Olympics faithfully reflect the principles of the Olympic charter, including Principle 6, which forbids discrimination of any kind.

"There cannot be a truly successful Olympics where there exist state-sponsored discrimination and other major human rights violations."

The letter added the "honour and privilege" of hosting the Olympics should not be given to countries "with laws designed to discriminate against or attack the dignity or human rights of any individual or group".

It added: "By consistently enforcing the standards set forth in the Olympic Charter, the Olympic Movement could indeed be a force for good."

The letter also asked the IOC to amend the wording of Principle 6, which forbids discrimination on ethnic, national, religious and racial grounds, to include a reference to sexual orientation and gender.

The IOC said it will consider the wording of the principle during a meeting to be held in December.