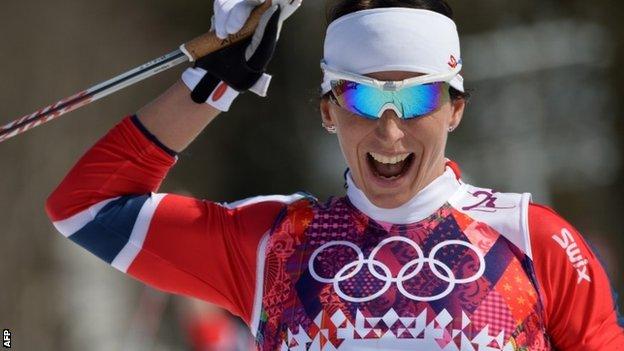 It was the sixth Olympic gold and 10th medal overall for the 33-year-old.

She finished in one hour 11 minutes and 5.2 seconds to lead home a Norwegian clean sweep with Therese Johaug in silver, 2.6 seconds back and Kristin Stoermer Steira winning bronze.

"It's incredible. I thought it would be hard but I've felt good," she said.

"I knew that I am stronger in the sprints, so I was waiting for them to attack on the last climb.

She also matches the 10 medals won by fellow cross-country skiers Stefania Belmondo of Italy and Raisa Smetanina of the Soviet Uniion and the United team, but they have won fewer golds.

Bjoergen, who won three golds in Vancouver, pulled away from Johaug heading into the stadium and sprinted clear to follow up on her wins in the 15km skiathlon and the team sprint classic earlier in the programme.

It was the first clean sweep in Olympic cross-country skiing since Vegard Ulvang led Bjorn Daehlie and Terje Langli for a Norwegian sweep in the men's 30km classic in 1992.