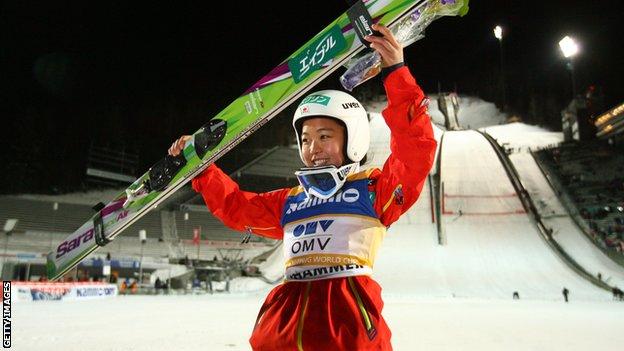 BOBSLEIGH - World Cup, Lake Placid, USA (13-15 December): British pilots Paul Walker and John Jackson will hope to build on encouraging displays last weekend. However, the USA have dominated the season so far, with reigning Olympic champion Steven Holcomb boasting a flawless record in both the four and two-man events. The latter is a double race at Lake Placid.

CURLING - Final Olympic qualification, Fuessen, Germany (10-15 December): Great Britain have long since booked their spots, but the final four teams heading to Sochi will be decided in Fuessen this week.

FREESTYLE SKIING - GB's 2010 Vancouver winter Olympian Ellie Koyander skis in her first first moguls World Cup of this season in Finland, while Harry Gillam competes in the aerials World Cup in China. Emily Sarsfield kicked off her ski-cross campaign off in Canada by finishing 24th this weekend. The second round is back in Europe this weekend in Val Thorens, France. And you can watch the race on the BBC red button on Sunday at 0955 GMT.

LUGE - World Cup, Park City (13-14 December): The fifth World Cup event of the season, and the last of 2013. Germany have been the dominant force so far.

SKELETON - World Cup, Lake Placid (13-15 December): British slider Lizzy Yarnold, who has claimed gold and silver in the season's opening two World Cups, will be in confident mood ahead of a double race at Lake Placid, USA.

The USA's Lindsey Vonn competed for the first time since tearing her anterior cruciate ligament in February.

She capped a successful comeback by finishing fifth in a World Cup super-G race in Canada won by Switzerland's Lara Gut. Afterwards Vonn said: "I know I can win again - I'm ready for Sochi." The 29-year-old had earlier finished 40th and 11th in downhill races won by Germany's Maria Hoefl-Riesch.

Also making a return to form was 36-year-old Bode Miller, who claimed his first World Cup Alpine skiing podium for two years. The American was ruled out last season because of a knee injury, but finished second to compatriot Ted Ligety in the giant slalom at Beaver Creek, Colorado.

Miller has been working with a fitness coach also used by boxer Manny Pacquiao, and has shed 20 pounds: "I'm so skinny now, all aerodynamic and snappy, to be able to ski four events the way I like to do it," he explains.

Eighth was also the position achieved by Walker's partner John Jackson, pilot for Britain's four-man crew. The Royal Marine said on Twitter that the performance was "a big confidence boost" as he continues his comeback from an Achilles injury.

Both women's races were won by the USA's Elana Meyers, who replaces Kaillie Humphries at the top of the standings. Canada's Olympic champion won silver in the first race, but struggled in snowy conditions in the second contest, finishing seventh - ending a streak of 15 consecutive podium appearances.

The USA's Steven Halcomb won both the two and four-man event, maintaining his flawless record this season.

Norway's Paal Goldberg delighted the home crowd in Lillehammer to win his first World Cup race. The 23-year-old was in tears after his victory in the 15km, admitting "I'm a bit shaken right now, it feels unreal".

American duo Meryl Davis and Charlie White laid down a marker for the Olympics by winning gold in the Grand Prix final in Fukuoka. It was their first competitive clash this season with training partners and Canadian rivals Tessa Virtue and Scott Moir, who they beat to gold by just over a point.

Meanwhile, Olympic champion Yuna Kim made her comeback from a foot injury at a lower-tier event in Zagreb. Despite several mistakes, including one fall, she won the competition.

A week earlier, Yarnold had won the season-opening race after Pikus-Pace was controversially disqualified, but this she time finished 0.68 seconds behind the American. Shelley Rudman ended fourth, with fellow Brit Dominic Parsons 10th in the men's race.

Gold-medal favourite Sara Takanashi comfortably won the season's first women's World Cup event in Lillehammer, Norway. However, Takanashi complained her sport is "not so much fun" without competition from Sarah Hendrickson, who is an injury doubt for Sochi. The 17-year-old also described the American as "a sort of icon rather than a rival."

Lilllehammer was the third stop of the men's World Cup. In the men's normal hill, Gregor Schlierenzauer claimed his 52nd career victory to move top of the World Cup standings. However, the Austrian could only finish 15th in the large hill contest, which was won by Germany's Severin Freund.

"Solid" was the verdict of GB snowboard cross star Zoe Gillings after her fifth-place finish at the opening World Cup event of the season in Montafon, Austria. The 28-year-old also revealed she has been invited to compete at the prestigious Winter X Games in Aspen, Colorado, in January.

The final World Cup event before the Winter Olympics saw Olga Fatkulina win her first sprint race of the season, although she was aided by Olympic champion Lee Sang-Hwa's withdrawal through injury.

South Korea's Moe Tae-Bum won the men's 1,000m. Shani Davis, Olympic champion over the distance in 2006 and 2010, had previously won all three of this season's races, but his third-place finish means he retains a significant lead in the overall standings.

Dutchwoman Ireen Wust won the women's 1,500m for her second win of the season, while the Netherlands won both team pursuit events.