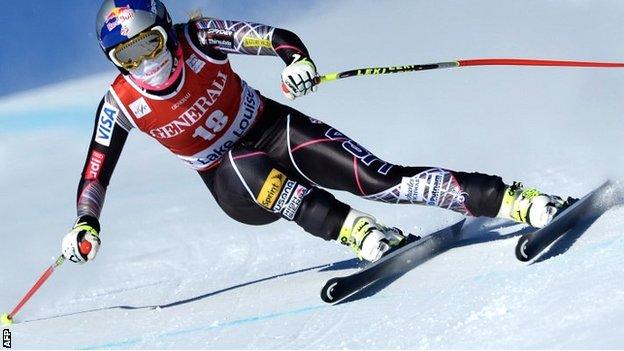 Olympic champion Lindsey Vonn continued her recovery from a knee injury by finishing 11th in the World Cup downhill at Lake Louise in Canada.

The 29-year-old American is trying to prove her fitness ahead of the Winter Olympics, which start on 7 February.

She said improving 29 places from 40th on Friday, her first competitive run since rupturing cruciate ligaments in February, was "a great step forward".

That gave her a second victory in as many days, with Tina Weirather of Liechtenstein, disqualified on Friday for wearing an arm protector over her ski suit, second in 1:55.43 and Austrian Anna Fenninger third in 1:55.56. Vonn clocked 1:56.35.

An icy course saw several racers crash, with Swiss Nadja Jnglin-Kamer escaping serious injury despite sliding sideways down the steep section of the slope and slamming into the safety netting.

Ahead of Sunday's Super-G at the same venue, she said: "I could be much more aggressive on the course. I still made a couple of mistakes but I'm really happy with the run I put together.

"It gives me confidence to bring into Sunday's race."

Hofl-Riesch, who won gold in the super combined and slalom at the 2010 Vancouver Games and the World Cup overall title in 2011, said after her fifth World Cup downhill win at Lake Louise: "The slope was faster today but my run wasn't as clean as yesterday.

"I lost a little bit of time in the middle section, but my performance was still good enough for the win, so I am really satisfied."