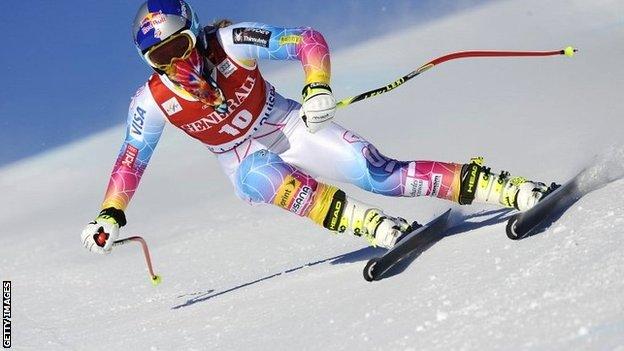 Olympic champion Lindsey Vonn adopted a cautious approach as she returned to competitive action for the first time since February.

Vonn recently re-injured ligaments in the same knee that had to be rebuilt following her crash at the World Championships in Austria.

It put her participation at February's Winter Olympics in Sochi in doubt.

Earlier this month, Vonn said she would delay any further surgery on her right knee in an attempt to be fit enough to defend her downhill title.

On Wednesday, she finished in 22nd place in the training run at the Canadian resort where she had previously won 14 times, including seven straight victories.

"I love Lake Louise, I'm so confident on this hill. It was the perfect place for me to come back," Vonn wrote in a post on her Facebook page.

"I was a little bit nervous because it was my first time in a race situation since February so it's been a long time and I'm really happy. The knee feels good, it feels stable."

Friday's event was won by Germany's Maria Hoefl-Reisch in one minute, 56.03 seconds - more than three seconds ahead of Vonn.

The Sochi Games, which begin on 7 February, would be Vonn's fourth Olympics. She made her debut as a 17-year-old at Salt Lake City in 2002.