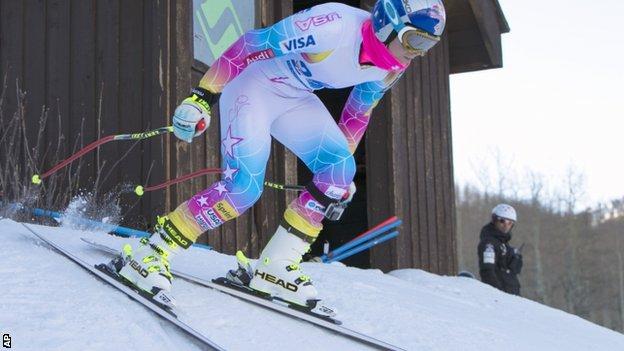 Lindsey Vonn will put off further knee surgery in the hope of being fit enough to compete at the Winter Olympics.

The Olympic downhill champion recently re-injured ligaments in the same knee that was rebuilt following a crash in the World Championships in February.

Vonn, 29, was due to return this weekend but the training accident has put her Sochi Games prospects in doubt.

"In the end, surgery is going to have to happen," said the American. "I might as well see how long it holds up."

Vonn, who partially tore the right anterior cruciate ligament in the 20 November fall at Copper Mountain, took several runs down the super-G course at Vail on Sunday. Afterwards, she said her knee felt "really good".

She will travel to Lake Louise, Alberta, for downhill training ahead of next week's World Cup event.

"Just trying to ski solid," she added. "I'm not trying to do race runs. I'm trying to build into it. Not push it too hard. But I was still able to be aggressive and confident in what I'm doing so that when I get up to Lake Louise I can hopefully have a good feeling right away."

The Winter Olympics begins in Russia on 7 February.