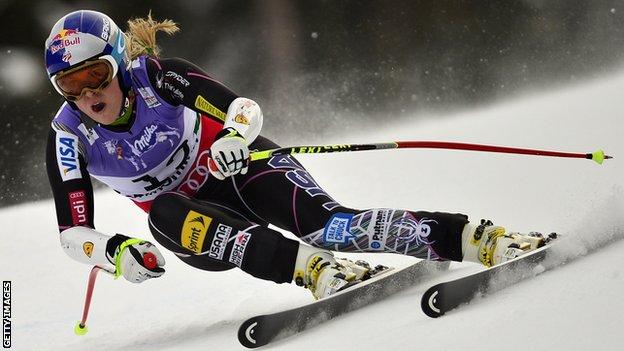 Olympic downhill champion Lindsey Vonn aims to return to action at a World Cup event in Canada next month despite re-injuring her right knee.

She will miss next week's World Cup races in Colorado but hopes to ski at Lake Louise on 6 and 7 December.

"Rehab is going well and I am working as hard as I can to race in Lake Louise in a few weeks," she wrote on Facebook.

Vonn had to have her knee surgically repaired after rupturing her anterior and medial cruciate knee ligaments - in addition to breaking a bone in her leg - in a crash at the Alpine Skiing World Championships on 5 February.

The four-time overall World Cup champion, who won Olympic gold in Vancouver four years ago, only returned to training in September.

She had hoped to make her comeback at the World Cup event in Beaver Creek, Colorado, at the end of November.

That target was pushed back following the accident at the Copper Mountain resort, in which Vonn also suffered cuts to her face and shoulder, but she remains hopeful of competing at Lake Louise, in Alberta.

She is facing a race to get fit in time to defend her Olympic title in Sochi, Russia, where the women's downhill event will take place on 12 February.