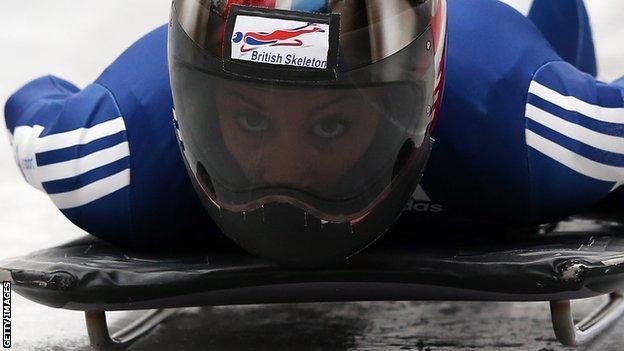 With results from the first seven World Cup races deciding how many sliders Team GB will be able to take to Sochi, it is important to begin the season well.

CURLING - The European Championships in Stavangar continue, with GB's women looking in good form so far.

American Lindsey Vonn will be absent at Beaver Creek but over in Canada, Team GB will be represented by TJ Baldwin and Dougie Crawford.

Meanwhile, British slalom skier Dave Ryding is set to begin the defence of his European Cup title at Trysil in Norway.

Britain's cross country skiers will be competing in Sweden and in Norway.

BIATHLON - World Cup, Ostersund, Sweden (22 November-1 December): It's the first World Cup of the 2013-14 season, and with just one GB spot in Sochi, Lee Jackson and Kevin Kane will both be looking for a good start to the campaign.

The European Championships are currently taking place in Stavangar, Norway.

As of Monday, Scotland's women, led by 2011 European champion Eve Muirhead, had won their first four group matches, including one against Russia, who beat them in last year's final.

The sixth and last Grand Prix of the season took place in Moscow at the weekend. The top six in each discipline from the season's Grands Prix will compete in next month's Grand Prix final, which will be a key form indicator ahead of Sochi.

Among the winners in Russia were 15-year-old Julia Lipnitskaia, who edged out former world champion Carolina Kostner of Italy by less than one point.

Olympic downhill champion Lindsey Vonn will make her return from injury at a World Cup event in Canada next month despite partially tearing her anterior cruciate ligament in a training crash last week.

The American will miss her scheduled comeback at Beaver Creek in the USA this weekend but hopes to compete in Lake Louise the week after.

"Don't worry guys, this is only a temporary setback," Vonn said on her Facebook page. "Nothing will keep me from picking myself back up and continuing to fight for my dreams."

Germany dominated at the second World Cup event of the season, winning all four races in Innsbruck-Igls.

Olympic champion Felix Loch finished first in the men's event in Austria, ahead of German team-mate David Moeller. There was also a German one-two in the doubles with Toni Eggert and Sascha Benecken beating Tobias Wendl and Tobias Arlt.

Meanwhile, world and European champion Natalie Geisenberger made it two wins from two this season, finishing ahead of team-mate and Olympic champion Tatjana Huefner, who was returning from a back injury.

The Germans then wrapped up the weekend with victory in the team relay.

Britain's Adam Rosen qualified for the main race, where he finished 24th.

As expected, Great Britain have earned three men's places and two women's spots for the Winter Olympics. The ISU, the sport's world governing body, has confirmed the allocation for each country after the conclusion of the Olympic qualifiers last weekend.

Only China and Canada earned the maximum number of places of 10 skaters.

Britain's Lamin Deen and Toby Olushi picked up a bronze medal in race five of the second-tier North American Cup, in Park City.

Windy conditions in Klingenthal played havoc with the first World Cup event of the season.

Veteran Austrian jumper Andreas Kofler was blown off course and had to be stretchered off after losing his balance on landing and crashing, while reigning World Cup champion Gregor Schlierenzauer and Anders Bardal both decided to forfeit their turns rather than jump.

The final round was cancelled but the result stood.

Britain's cross country skiers got their season off to a solid start at events in Beitostoelen, Norway and Bruksvallarna, Sweden.

Andrew Musgrave enjoyed one of his best ever classic results to finish 13th in Norway, while his sister Posy edged closer to the BOA qualification standard by finishing 14th in the prologue in Sweden. There were also a couple of promising performances from Callum Smith.

The Australian Olympic Committee (AOC) has imposed stringent alcohol restrictions on its athletes at Sochi 2014. New rules state athletes are allowed to consume alcohol responsibly outside the Olympic village after their events but no alcohol will be permitted in the Olympic Village or on the return flight to Australia following the Games.

The Russian government has announced that its athletes who win Olympic medals in Sochi will receive a financial bonus. Gold medal-winners will get £75,000.

After visiting the North Pole and Space, the Olympic torch has now been taken underwater, visiting Lake Baikal, the world's deepest lake.