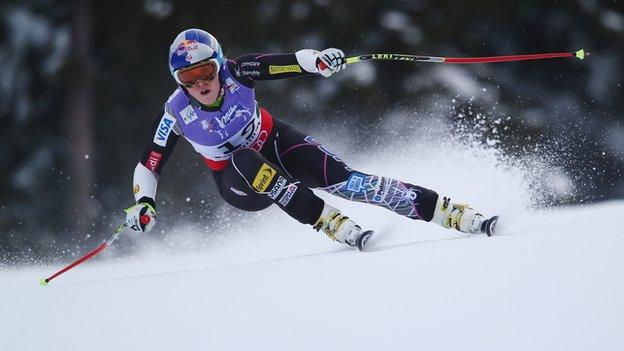 In 2010, Vonn became the first American woman to win the Olympic downhill title.

She is also a four-time overall World Cup winner, a two-time world champion (2009 Downhill and Super-G) and one of a handful of women to have won a World Cup race in every discipline. She has won 17 World Cup titles, a record in women's skiing.

Vonn crashed in the Super-G in the first race of the 2013 World Championships in Austria and ruptured cruciate ligaments in her right knee.

She then partially tore the reconstructed ligaments in another training crash in mid-November, just a week before her scheduled comeback.

Vonn asked if she could compete in a men's World Cup downhill race in November 2012 but her request was turned down by skiing's world governing body.

According to her mother Lindy, Lindsey knew aged eight that she wanted to win more gold medals than any other female skier, and used to practise her autograph.

When Vonn was 10, she met top skier Picabo Street at an autograph signing in Minneapolis.

The meeting left such a deep impression on Vonn that her attitude towards skiing changed from "just doing it for fun" to "really wanting to be an Olympian".

She married fellow skier Thomas Vonn in 2007 but they divorced in 2012. In March 2013, she announced she was dating Tiger Woods.