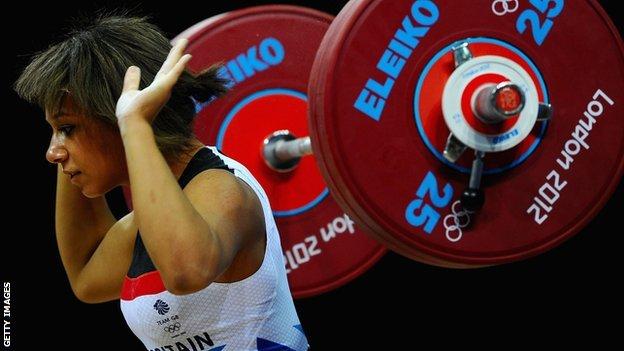 London Olympian Zoe Smith has been left out of the GB squad for the World Weightlifting Championships in Poland after failing to recover from injury.

Smith, 19, won bronze at the 2010 Commonwealths, but has struggled with a back problems for the last two years.

"We wanted her to rehab properly rather than rush it to make the Worlds," said GB performance director Tommy Yule.

We're very motivated Zoe can fulfil her long-term promise in the sport.

Natasha Perdue, Jack Oliver and Emily Godley will represent Britain at the event, which starts on October 16.

The previous World Championships in Paris effectively secured Smith her place at the London Olympics in 2012.

However, since setting a new British record of 121kg last summer Smith has lifted competitively only once, at the Australian Youth Olympic Festival in January.

She relocated from London to Bath to be closer to her athlete boyfriend Connell Macquisten - who is at university in the city - but has continued to be hampered by her long-standing back injury.

"Hopefully with a winter of appropriate rehab and training she can come back strongly for next year," Yule told BBC Sport.

"We're very motivated Zoe can fulfil her long-term promise in the sport."

Perdue, 38, and Oliver, 22, will compete in their respective 69kg and 85kg divisions. English champion Godley, 22, who was granted UK Sport funding for the first time earlier this year will lift in the -63kg class.

"They have all had experience on the international stage before and we are optimistic they will do well and push for personal best performances," added Yule.

"We are realistic about their chances, but this is just one step of many on the road to Rio 2016."