The Manchester United legend took his first permanent post in management earlier this week after Chris Coleman left to take charge of Sunderland in November.

Some fans have argued that Giggs' lack of appearances in friendly games as a player means he is not committed, and never has been committed, to his country.

BBC Wales has examined the stats and the history of Giggs' Wales career. 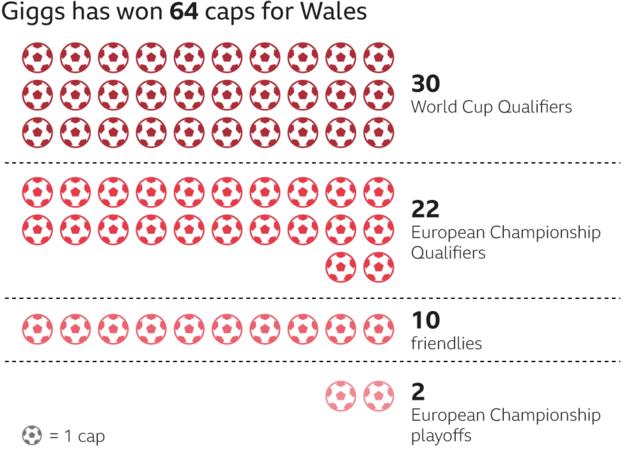 During his international playing career Giggs won 64 caps between his debut against Germany in 1991 European Championship qualifier and his final appearance in 2007.

Blackmore said Giggs "didn't have much choice" when it came to playing in friendly matches.

Of the 30 friendlies Giggs missed, 10 would not have interfered with his club career. However, 20 were played days before a Manchester United fixture.

Of those 20 games, Giggs featured in 85% of games for United, starting in 15 and making a further two appearances off the bench.

On only three occasions did Giggs not play in a Wales friendly game and then not play for Manchester United.

So was Ferguson right to stop Giggs from playing friendly games and did he have evidence to back up his protection?

Giggs only once played in a Wales friendly and then missed the following game for Manchester United. On that occasion, he was rested against West Ham before a Champions League game against Real Madrid the following Tuesday.

You can find the full list at the bottom of the page. 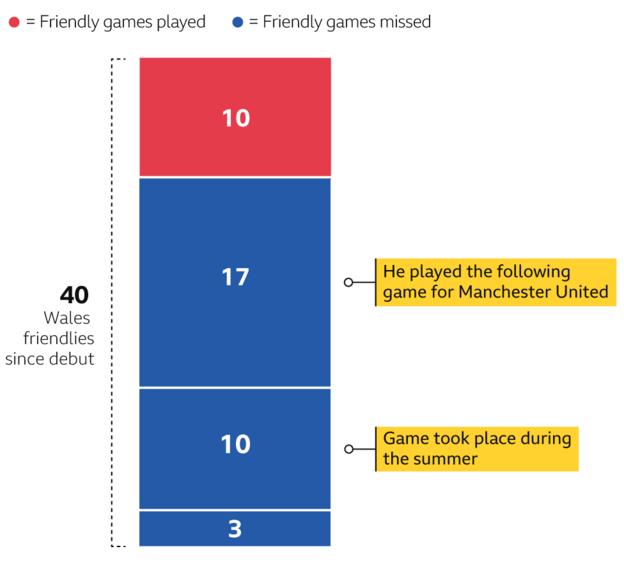 How does this compare?

Blackmore said that while Ferguson was keeping Giggs wrapped up in cotton wool, he and Mark Hughes had the chance to play in friendlies.

But former Stoke City manager Hughes made only eight more appearances for Wales than Giggs over a similar period of time.

In total, 62% of Saunders' appearances for his country came in competitive games, compared to 84.4% for Giggs.

But how does Giggs compare to Wales' current superstar Gareth Bale.

Real Madrid forward Bale has played just 26 minutes of Wales' past seven friendly matches and 53 of his 68 caps have come in competitive games - 77.95%.

So, while Giggs' record of turning up for friendlies is not as impressive as some of his contemporaries, it is certainly comparable to that of Bale.

What about his competitive record?

Another accusation thrown at Giggs is he did not deliver enough for Wales in the biggest games, with arguments particularly that he did not score enough goals.

Giggs played 963 games for United, scoring 168 goals, meaning he averaged a goal for United every 5.7 games.

While for Wales he scored 12 in 64 appearances, meaning an average of a goal every 5.3 games - a goal record actually better for his country than club.

Giggs also produced some stand-out performances over the years, against Germany and Belgium at Cardiff Arms Park, and especially against Finland and Italy in games staged at the Millennium Stadium.

He also did so at a time when the common perception was that if you stop Giggs, you stop Wales and he was often marked by two or even three players.

So while Giggs undoubtedly missed a lot of friendly matches, his record is actually comparable to that of Bale and considering the 'Fergie factor' and club career Giggs had, not to mention the relative strength of his Wales era compared to now, is the criticism of him really merited?

Have your say in the comments section below.