Perched on the steps of Oslo's busy harbour front with the sound of roaring supporters in the background, Czech player Michal Danes is smiling: "I am seeing the sea for the first time in my life."

An event such as the Homeless World Cup is, among other things, a chance for many spectators to reflect on what is so often taken for granted. The soothing sound of the sea may never have occurred to them to be a privilege.

This is the 15th edition of the event, a four-a-side football tournament for the marginalised and disadvantaged of society whose lives have known little more than poverty, drug abuse and disease.

But as Danes' case proves, this is much more than just a football tournament. From lively Chilean Cueca dances to Sampeah greetings from Cambodia, this is a marvellous melting pot of cultures.

A carnival atmosphere of 72 teams, 300 volunteers and 100,000 spectators joining forces to celebrate the true values of football, so recently drowned out by the shrill tills of transfer deadline day.

While there's a Czech Michal on the pitch, there's a Welsh Michael in the stands. Michael Sheen, in fact, the most inconspicuous of Hollywood actors sat amongst the Welsh supporters so passionately singing what seems to be the chant of the tour - 'Oh Fluffy Sheep' - a Welsh aria about their fondness for the farm animal.

Sheen is a patron for Street Football Wales and does have a long term aim of one day staging it in his home country.

On this occasion he was able to help the team celebrate winning their tournament.

"'It's brilliant," he says. "It brings people together who would otherwise feel excluded, it gives them confidence, it gives them self-empowerment and you can support them in ways you wouldn't be able to normally.

"I'm hoping to bring it to Wales at some point. It's not just a wonderful experience for the players but it's an opportunity to create a focus around 'homelessness' and break down the stigma and pre-conceived ideas for the public at large.'

The Welsh team is full of colourful characters but Dee Sampson's optimism is infectious. When she scores, the team celebrate that bit louder.

After serving a jail sentence for drug offences, Sampson lost her house and after being released in 2013 she spent the next three years living on the streets.

"I didn't have a clue how to live on a street. It was the community of homeless people that taught me how to do it. It sounds silly, in so many ways it's unfortunate, but it was also an amazing experience," she reflects.

"When I eventually got a hostel last year I was invited to Street Football Wales. I'd never kicked a ball in my life. The next thing you know I'm here. 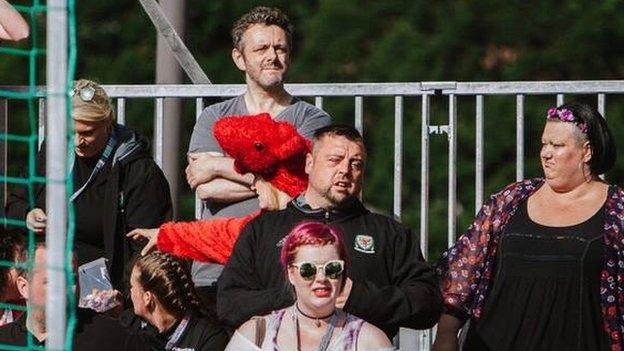 "Football's really helped me to get some stability back in my life. It builds your confidence, and helps you to realise your full potential.

"I've turned my life around. I don't get into any trouble anymore with drugs or alcohol. I'm now going home clean to my three children."

"If you're selected for this tournament, it means you live in the slums. You may have some sort of home, but it won't have a toilet or a kitchen. Maybe a roof. They also give priority to those with AIDS," says Kenyan captain Peris Nyakowa.

The stories differ from around the globe.

From the slums of Kenya to the Mexican city of Juarez where for three boys football is not so much an uninhibited past-time, but a roll of the dice with death.

"They may go out to play football, and you don't know if they'll come back because the killings in the cities are so bad," the President of Street Soccer Mexico, Daniel Copto tells me.

"I also meet Indian women who are returning to a country where football is still not considered 'a girl's game.'"

Many of the participants from the event are now returning to challenging circumstances, but for one week in Norway they found a home and a purpose... and they found it on a football pitch.