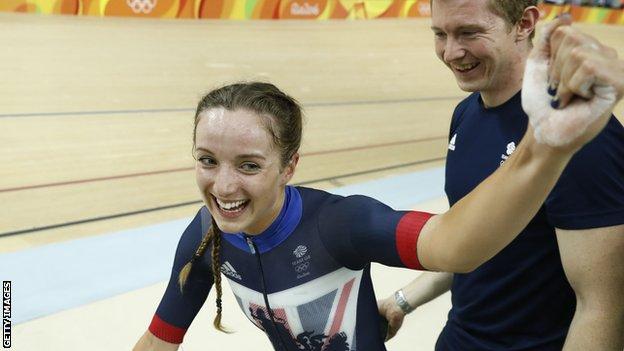 Olympic champion Elinor Barker is targeting success away from the team pursuit at the World Championships in Hong Kong next month.

Barker was part of the Great Britain quartet who won the team pursuit gold medal in Rio last year.

The 22-year-old is looking to compete in the points, scratch or Madison events next month.

"I just wanted to have a break from team pursuit," Barker told BBC Sport Wales.

Barker was also a member of the team pursuit quartet who won the world title in 2013 and has concentrated on that event ever since.

"I could have done the team pursuit this year, I still enjoy it and get a lot out of it," said Barker.

"But if I am still going to do it in Tokyo at the 2020 Olympics which is where I want to be, I needed to take a step back from it this year and possibly next year and come back into it fully motivated.

"Otherwise it would have been eight years of my life that I would have dedicated to (the team pursuit) and that's a lot.

"I have done individual events at world championships before but it has always been after the team pursuit and I have always been fatigued.

"I have never done specific training for individual races. If I can go into it wholeheartedly hopefully I can get some more success."

Barker achieved her Olympic success with Laura Kenny, Katie Archibald and Joanna Rowsell Shand, but none of the gold medal winners will compete as a quartet in Hong Kong.

Archibald will also be competing in individual events, four-time Olympic champion Kenny is pregnant, while Rowsell-Shand has announced her retirement.

"The topic of the conversation is how different team pursuit is going to look," added Barker.

"None of us are doing team pursuit for various reasons but the new squad looks strong and it's good to have some fresh blood."

Rowsell Shand announced she was quitting international cycling after winning gold in the team pursuit at London 2012 and Rio 2016.

In a career spanning 10 years, she was a five-time world and four-time European champion.

"Joanna has won everything and was such an inspiration," added Barker.

"She was always the senior rider and was able to give out the sound advice. I will miss her being around."