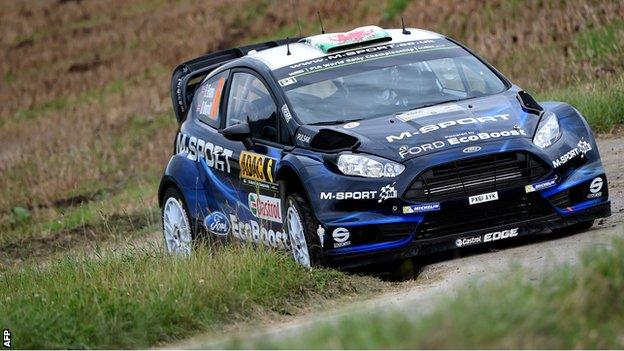 Elfyn Evans finished fourth at the Rally of Germany after winning his first-ever full stage win in the World Rally Championship.

At the ninth round of the Championship, Evans drove a near-faultless rally in his Fiesta with co-driver Daniel Barritt

The 25-year-old M-Sport driver took the win in the power stage event.

"We've had a good weekend overall and that was the icing on the cake," he said.

"If we can keep on moving forward it's positive for the future."

Thierry Neuville of Belgium won the rally ahead of Dani Sordo and Andreas Mikkelsen after Northern Ireland's Kris Meeke had earlier crashed out while leading.

M-Sport team principal Malcolm Wilson has confirmed the Welshman will be in the team for next year's Championship.

"It's a massive help for me because I don't have to worry about trying to prove myself," Evans added.

"I can concentrate on learning as much as possible on every event and that's going to be really important come next year."