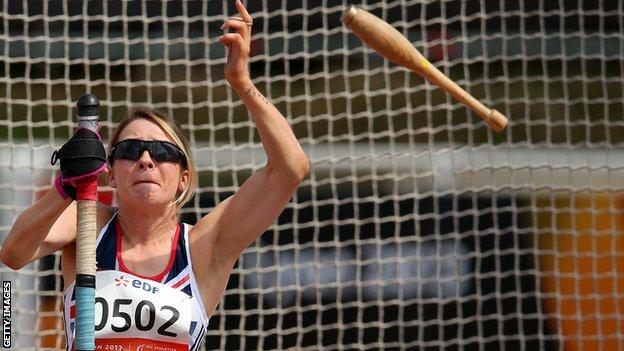 Paralympic champion Josie Pearson was frustrated with her performance after winning silver in the F32/51 club throw at the IPC European Championships.

Pearson threw 14.02m to collect 941 points but was beaten by Great Britain team-mate Joanna Butterfield who set a new European record of 1110 points.

"One of the officials brought up a technical issue that I was unaware of. It was a bit of a distraction.

"I'm slightly disappointed that I couldn't perform to my absolute best but a silver medal, I'll take that."

Pearson was competing at her first European Championships and enjoyed the atmosphere in Swansea.

"These European Championships have been amazing," she said.

"Having it in a home city where you've got your family and friends here to support you, it's just been a really good experience."

Laura Sugar, who won bronze on Thursday, missed out on another medal in the F44 long jump after finishing fourth.