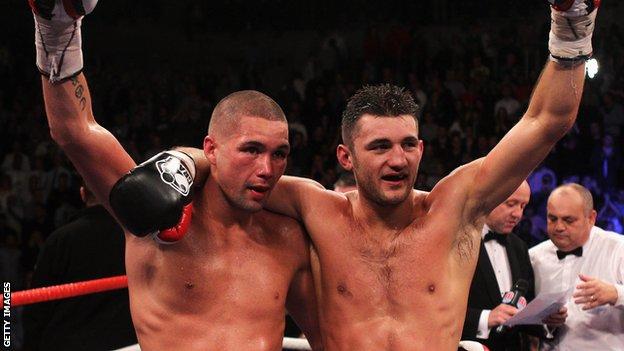 Nathan Cleverly will share top billing with Tony Bellew when they both fight on the same Liverpool card on 12 July.

The opponents for the rival cruiserweights will be announced at a news conference on Tuesday.

Also on the bill at the Echo Arena in Liverpool are British Olympian Anthony Joshua and brothers Stephen, Paul and Callum Smith, plus Rocky Fielding.

Cleverly beat Bellew on points at the same venue in a light-heavyweight clash in October 2011.

The pair, who have both stepped up a weight class since their fight, are set for a rematch later this year.

Bellew was the first to move to the 200lb limit with an 11th round stoppage of Valery Brudov in March.

The Cefn Fforest fighter made his cruiserweight debut in May with a second-round win over Shawn Corbin after he lost his WBO light-heavyweight title to Russian Sergey Kovalev in Cardiff.

Promoter Eddie Hearn said: "There's real animosity between Tony and Nathan as they aim to overcome one final hurdle before they meet in October.

"Anthony fights in Liverpool for the first time as a pro and Callum and Rocky will be making big step-ups."