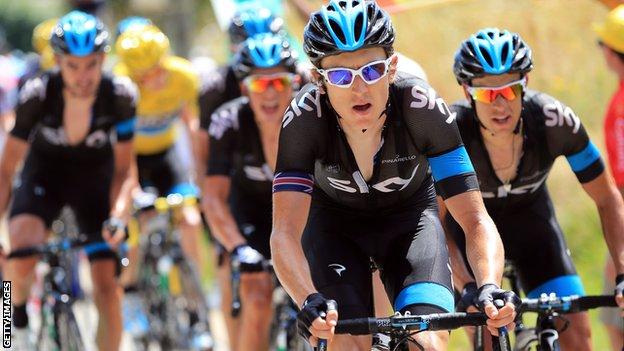 Team Sky rider Geraint Thomas says he is considering offers from number of different teams for next year.

Thomas says his current employers are among four or five options he is considering.

"There's been a lot of interest - a lot of teams are keen," Thomas said.

"Post-2012 London Olympics, Geraint Thomas has reached some sort of crossroads in his career.

"He's focusing on the road, the track days are over. Now he's got to decide what does he specialise in? Is it a Grand Tour winner, the Tour de France or Giro D'Italia, where he needs to be an all-rounder or does he focus on the one-day races? They're known as classics which tend to be raced in the springtime.

"Thomas has given some sort of focus to this over the last few years and it hasn't gone that successfully though things this year did improve a little bit and he was unfortunate with a number of accidents.

"You get the impression that classic one-day racing will still be his focus now he has to decide whether or not he stays with what he knows or he looks elsewhere. What this boils down to is which team can offer Thomas the best pathway to reach his goals."

Double Olympic Gold medallist Thomas joined Team Sky when they were formed in 2010 having previously raced for Barloworld.

He was Team Sky leader at this year's Paris-Nice stage race where he crashed on the penultimate stage scuppering his chances of victory.

"I'm obviously speaking to Sky at the moment and I think it should be sorted this week with where I go," Thomas told BBC Wales Sport.

"Obviously Sky is a great team but I think it's good to have a look at other teams and what they have to offer.

"It gives your confidence a boost when there's three or four teams that have offered you a good contract, so interesting times."

Cardiff-born Thomas won gold on the track at the 2008 and 2012 Olympic Games but now concentrates on road racing.

He has confirmed he will compete in the time trial as well as the road race at the Commonwealth Games in Glasgow.

The time trial will be held four days after the completion of the Tour de France.