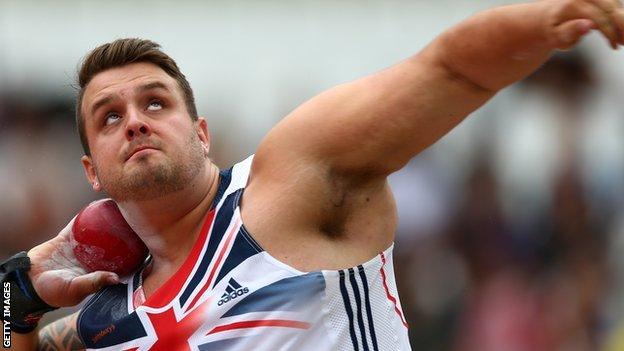 Paralympic and double world champion Aled Sion Davies says he can only improve despite enjoying an excellent start to his season.

Davies broke a 12-year-old world record for the discus by throwing 48.87m at the Weir Archer Academy meeting in London last weekend.

The 22-year-old also broke his own shot put world best of 14.87m and has been delighted with his early season form.

"I didn't really expect to do as well in my first competition," Davies said.

"I've gone in there relaxed and I'm nowhere near ready for the season yet and have managed to pull that last throw.

I'm so hungry for this gold medal and I'm going to do anything I can to make sure I get it.

"It really does excite me to think what I'd be able to produce heading up to the Commonwealth Games and during it of course.

"I know I've won Olympic gold but now we've got to maintain it and keep pushing the barrier and make sure no-one can come near me."

Bridgend-born Davies underwent an operation on a long-standing foot injury during the close-season but is fully focused on the season ahead.

He has targeted further glory at this summer's Commonwealth Games in Glasgow and the European Championships in Swansea.

"Now that we've hit the targets in terms of distance obviously all eyes are on Glasgow," Davies added.

"It's a very big thing for me as a patriotic Welshman and putting on that Welsh vest is really close to my heart.

"I'm so hungry for this gold medal and I'm going to do anything I can to make sure I get it.

"I'm looking forward to it more now than I was in London because I know what I'm capable of doing.

"I want to bring home that gold back to Wales."