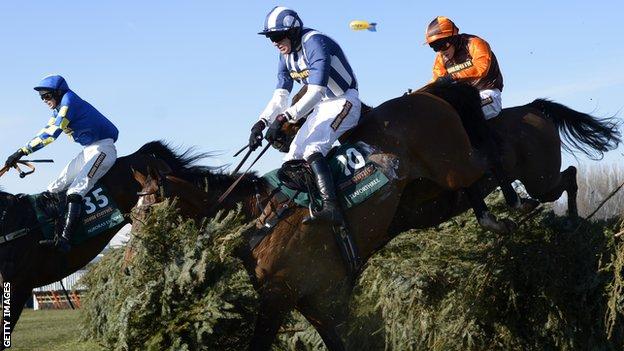 Teaforthree may be favourite for the 2014 Grand National, but trainer Rebecca Curtis says she is taking nothing for granted.

Teaforthree is the 9-1 favourite to become the first Welsh-trained winner of the Grand National since 1905.

Jockey Nick Scholfield, who rode him to a third-place finish in 2013, rides him at Aintree on Saturday.

"It would be amazing. It is one of those races everybody wants to win," said Curtis.

"Every jockey, owner and trainer wants to win it because it is so hard to win. Even as Teaforthree going in as favourite, you need so much luck.

"It is not going to be a little trot around for him and the race is won. It is a hard, hard race and there is a lot of luck involved.

"There are so many bad luck stories where you are going well and you get brought down, and this and that."

The 10-year-old runs out of Curtis' stable in Newport, Pembrokeshire. The last Welsh-trained winner at Aintree was Kirkland in 1905, a horse recorded as being in the stable of Edward Thomas at Lawrenny Park in Pembrokeshire.

Several Welsh-born trainers, including Ivor Anthony and Fulke Walwyn, have won the National since, but always from training bases in England.

Teaforthree is one of a handful of runners with Welsh connections in this year's Grand National.

Trainer Evan Williams' One In A Milan runs in the race and the Cowbridge trainer has not finished out of the top four in the last five years.

Mountainous, the winner of this year's Welsh National, is owned by the Welsh chairman of Ffos Las racetrack chairman, Dai Walters.

Tidal Bay, the top weight will be ridden by Welsh jockey, Sam Twiston-Davies.

Vale of Glamorgan trainer Tim Vaughan could be represented by Golan Way and possibly Saint Are at Aintree.