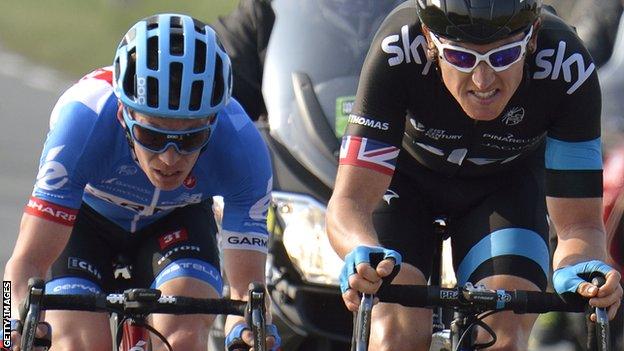 Geraint Thomas leads the Paris-Nice road race after finishing second in stage four from Nevers to Belleville on Wednesday.

Tom Jelte Slagter of the Netherlands won the stage in a sprint finish ahead of Team Sky rider Thomas.

Slagter broke away from the peleton on the last of four moderate climbs, with only the Welshman able to keep up.

Slagter improved to third overall, four seconds behind the double Olympic track gold medallist at the halfway mark of the eight-stage race.

Thomas was handed the responsibility of leading Team Sky after defending champion Richie Porte withdrew to compete in the Tirreno-Adriatico race.

On Thursday, the riders will race from Creches-sur-Saone to Rive-de-Gier, with Team Sky aiming for a third consecutive success after victories by Porte and Bradley Wiggins in the past two years.