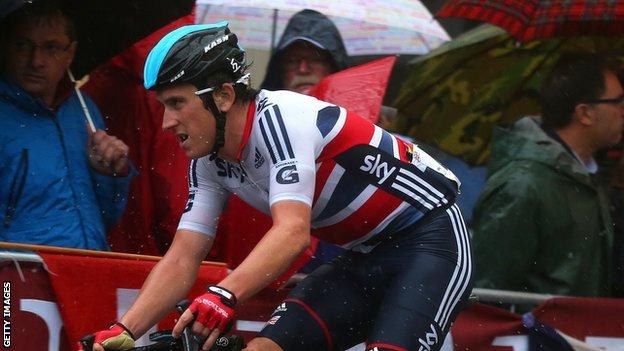 Geraint Thomas has hinted he will focus on major stage races such as the Tour de France from 2015.

The Welshman is leading Team Sky's challenge in the Paris-Nice road race and was lying fifth after stage three.

"I think next year I'll probably maybe start to go down that g-c [general classification] route really and look to try and improve there," he said.

I've definitely got a lot of head room, really, to improve because... I haven't done a lot of climbing efforts and stuff

He now hopes to improve in mountain stages to help his team's top riders challenge for major tour titles.

"It's kind of coming to that point now in my career where I want to sort of specialise a bit now rather than be good at a lot of things.

"I want to try and be really good at the one thing.

"And so I think this is the last sort of year where I'll target both with the same sort of focus."

Froome withdrew from Team Sky's entry to the Tirreno-Adriatico stage race that starts on Wednesday, 12 March.

That prompted Richie Porte to switch from Team Sky's Paris-Nice squad with Thomas taking over.

With future priorities to determine, Cardiff-bred Thomas said: "It's nice to get this little opportunity now.

"It's kind of come out of nowhere, really. I got a call saying I was going to lead the team here, so it was a bit all last-minute.

"I guess it will show me where I am at this moment in time.

"I think I've definitely got a lot of head room, really, to improve because... I haven't done a lot of climbing efforts and stuff.

"Obviously weight, as well, comes into play a lot when you're climbing. The same as time-trialling as well - I've never really trained too much on my time trial bike."

The Welshman will discuss the Paris-Nice race in his next column for the BBC Sport website.