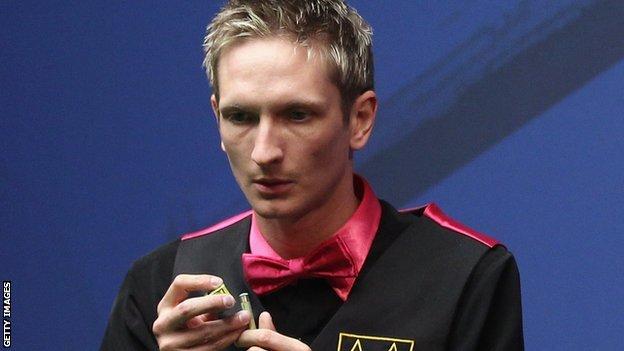 Welshman Andrew Pagett came from 3-2 down to beat Northern Ireland's Gerard Greene 4-3 and progress to the third round of the Welsh Open.

Pagett, from Newport, will face title holder Stephen Maguire, who came back from 3-1 down to beat Sam Baird 4-3.

Judd Trump showed signs of a return to form by beating Jamie Burnett 4-1.

"I am still getting a bit of bad run," Trump said. "He could have pinched the first frame with a fluke when I was in control and it would have followed the pattern of my year.

"But I potted a good pink to win it and then felt in control. I felt good and confident out there. I am getting to somewhere near my best."

Three-time winner John Higgins is also through to the last 32 after beating Ken Doherty 4-0, while world number two Mark Selby claimed a 4-1 win over Dave Harold to set up a clash with Dominic Dale, who beat Thailand's Dechawat Poomjaeng 4-1.

Matthew Stevens is also through after a 4-2 victory over Ian Burns.

Fellow Welshman Michael White bowed out of the tournament following a 4-3 defeat to China's Xiao Guodong.

Two century breaks helped Mark Allen secure his passage into the last 32 with a 4-2 win over Noppon Saengkham.

Thailand's Saengkham took the opening frame but Allen responded with breaks of 101 and 106.

Saengkham levelled the match but Northern Ireland's Allen produced a break of 61 before clinching a scrappy sixth frame to complete the win.

Scotland's Scott Donaldson made a break of 118 during his 4-1 defeat of David Gilbert and Andrew Higginson edged past fellow Englishman Jimmy Robertson 4-3 with breaks of 54 and 66.

James Wattana overcame Tom Ford 4-2, a win that included a break of 73, and 19-year-old Joel Walker scored one of his best results so far with a 4-3 defeat of world number 13 Mark Davis.