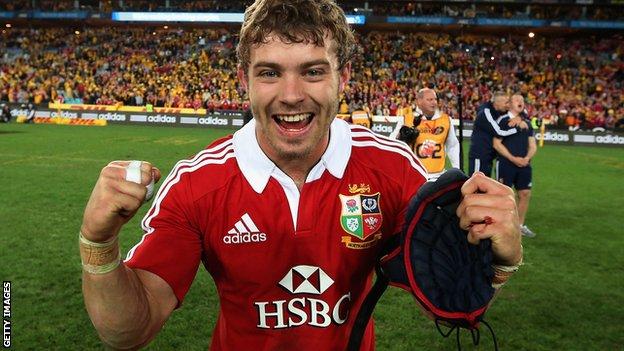 Cardiff Blues full-back Leigh Halfpenny has already won plenty of plaudits and accolades during an unforgettable 2013 for Wales and the British and Irish Lions.

Halfpenny was the Six Nations' player of the tournament and the Lions' man of the series on their successful tour to Australia.

He was an ever-present in Wales' Six Nations campaign, which did not get off to the best of starts with defeat to Ireland at the Millennium Stadium.

After victory over France in Paris, a game in which Halfpenny earned the Man of the Match award, the campaign gathered momentum and another impressive Halfpenny kicking display secured victory in Italy before a 23-point haul helped Wales win away to Scotland.

On the back of Wales' Six Nations triumph, Halfpenny was one of 15 Welshmen included in the British and Irish Lions squad for the summer tour of Australia.

Halfpenny's first appearance on tour saw him score a try and kick three penalties in a comprehensive 64-0 win over a Queensland-New South Wales Country XV before a further two tries in the victory over New South Wales Waratahs.

The full-back made his Lions Test debut in Brisbane and contributed 13 points with the boot to beat Australia 23-21.

Halfpenny's five penalties had given the tourists the lead in the second Test in Melbourne but fell short with a penalty from halfway which would have secured victory and a series win.

The scene was set for the third and final Test in Sydney and Halfpenny played a prominent role as the Lions sealed a first series win in 16 years with a stunning 41-16 win over the Wallabies.

Not for the first time in 2013 Halfpenny was named man of the match. He set up a crucial try for fellow Welshman North and finished with 21 points - a new individual record for a Lion in a Test.

Halfpenny's haul in the third Test took him past Neil Jenkins's previous series record and he was voted man of the series. and in November nominated for the International Rugby Board's Player of the Year.

"I can't put it into words really how much it means... to be part of a winning Lions tour is one of the best things ever and up there with the best moments of my career," said the 24-year-old, who is now one of the most sought-after talents in world rugby.