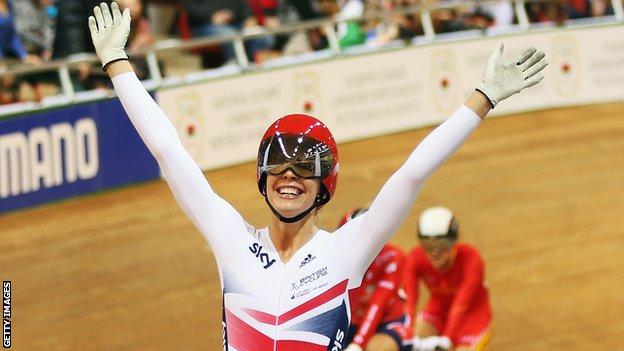 Abergavenny-born James became the first British rider to win four medals at a single World Track Cycling Championships, a feat which even her role model and double-Olympic champion Pendleton failed to achieve.

If James was a country, she would have finished joint fourth in the medals table with two golds and two bronze medals at the World Championships in Belarus in February.

Success in Minsk came after a disappointing and frustrating 2012 in which injury and illness had scuppered her Olympic dreams.

James was a reserve for the team sprint event at London 2012 and could only look on as Pendleton won keirin gold in another successful games for the Great Britain cycling team.

James and Vicky Williamson had picked up Britain's first medal with a bronze in the women's team sprint followed by another bronze in the 500m time trial before securing two golds in 24 hours.

The 21-year-old clinched her first world title by battling back to beat Germany's Kristina Vogel and succeed Pendleton as women's sprint champion.

Competing for a fifth straight day in Minsk, James did not show any sign of tiredness as she came through two races before winning the keirin after leading the final from the start to triumph.

"I just need someone to pinch me and tell me if it's really happening to me. I'm just still taking it all in. I can't actually believe it's happened. It's absolutely crazy," James said after winning her second gold medal.

Her victories earned praised from no less than Pendleton herself, who regarded Minsk as a turning point in James' fledgling career and predicting further titles in the future.

The prestige of being a double World champion saw James invited to ride in the lucrative Japanese keirin circuit - the first British woman to do so - winning all nine races she competed in.

Upon her return to the UK for November's Track World Cup in Manchester, James wore the rainbow-striped world champion's jersey as she added keirin silver and a sprint bronze to her ever increasing collection.