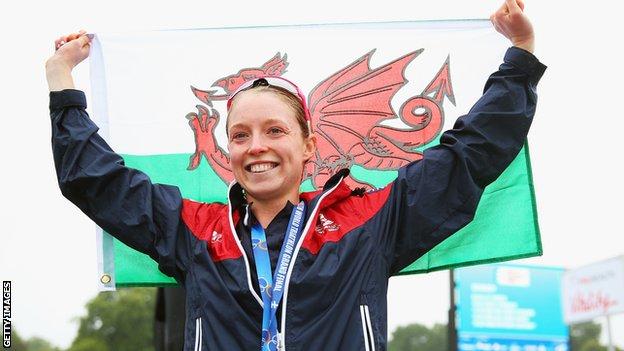 Triathlete Non Stanford took no time in establishing herself at the very top of her sport in 2013.

The 24-year-old's achievements are all the more remarkable given that she only took up triathlon during the summer of 2008.

But injury forced a change of direction. As part of her rehabilitation she took up swimming and then joined the University of Birmingham's triathlon club.

Her development as a triathlete was rapid, culminating with victory in Auckland in October 2012 where she was crowned Under-23 World Champion.

Training alongside the Brownlee brothers, Alistair and Jonny, she claimed her first title as a senior in April, winning the European Cup triathlon in Portugal

In the opening World Triathlon Series event of the season in San Diego a stunning sprint finish saw her claim second place.

Having missed the races in Auckland and Yokohama, Stanford came back to claim her maiden Series win in Madrid, 26 seconds ahead of Germany's Anne Haug.

She could only finish 16th in Kitzbuehel, Austria at the beginning of July and opted to miss the European Championships to concentrate on her World Series bid.

That decision seemed to have been vindicated when she finished second in Hamburg in July.

But a crash on the same weekend during the mixed relay triathlon resulted in a night in hospital and the subsequently discovered broken arm threatened to scupper her season.

Stanford conceded she had been "very lucky" to escape more serious injury and was back in action a month later in the penultimate event in Stockholm.

There she finished second behind her rival for the title and series leader, the United States' Gwen Jorgensen.

Going into September's Grand Final in London, Stanford was third in the standings ahead of the race, 13 points behind favourite Jorgensen.

The Welshwoman overcame a 15-second penalty - for not placing her wetsuit in the box - before a superb run ensured victory in Hyde Park and the title of ITU World Champion.

In winning she became only the second woman to be crowned back-to-back Under-23 and World Triathlon titles, an achievement even Stanford herself could barely imagine.

"Twelve months ago I was absolutely over the moon to win the under-23 world title... I never ever dreamt that just one year later I'd be sitting here as senior world champ," she said.