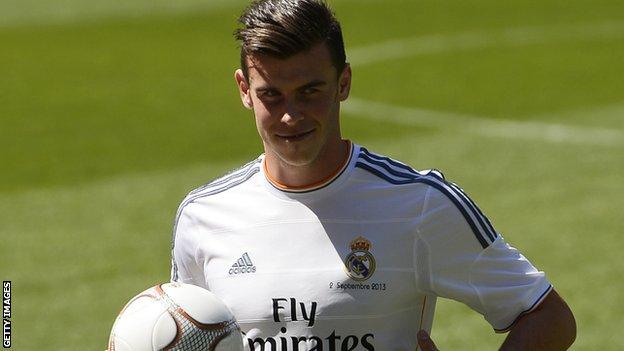 Gareth Bale's life changed forever on 2 September when he was presented to the world as a Real Madrid player - the most expensive footballer in history.

The Welsh winger's protracted transfer to the Spanish capital was football's big talking point of the summer and so was the record £85m price tag.

"I know many players talk of their desire to join the club of their boyhood dreams, but I can honestly say, this is my dream come true," said Bale after his unveiling at the Bernabeu.

"I am now looking forward to the next exciting chapter in my life, playing football for Real Madrid."

Nicknamed El Principe de Gales (The Prince of Wales), Bale scored on his debut against Villarreal although a thigh injury suffered during pre-season meant it was far from an easy start to life in Spain.

His first El Clasico game against Barcelona saw him substituted and receive criticism from sections of the Spanish media, who were scrutinising his every move.

But Bale put the early setbacks behind him, netting twice in a 7-3 win over Sevilla - his first home start for Los Blancos - and scoring in a Champions League tie against Juventus.

The 23-year-old from Cardiff was finally showing he was worthy of being a Galactico.

Bale had scored 26 goals as Tottenham Hotspur reached the quarter-finals of the Europa League and pushed for a top-four place in the Premier League.

Crucially Spurs missed out on Champions League spot on the final day of the season despite Bale's goal in a 1-0 win over Sunderland, a game which would prove to be his White Hart Lane farewell.

The Football Writers' Association chose him as their Footballer of the Year, the first Welshman since Neville Southall won the award in 1985.

Later in the year Bale was included on the 23-man shortlist for the Fifa men's world footballer of the year award, rubbing shoulders with the likes of team-mate Cristiano Ronaldo and Barcelona's Lionel Messi.

Bale's commitment to Wales cannot be questioned. Days after sealing his move to Madrid he joined his national team for the World Cup qualifiers against Macedonia and Serbia.

Although Wales have been unsuccessful in the World Cup campaign, they can be proud of having a genuine world-class player in Bale, and his presence will be vital if Wales are to have any chance of qualifying for the Euro 2016 finals.