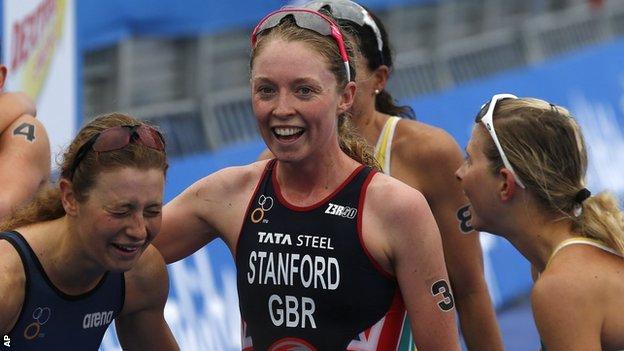 Dame Kelly Holmes has backed Wales' Non Stanford to take on a triathlon-10,000m double at the 2014 Commonwealth Games in Glasgow.

After winning the world triathlon title in London at the weekend

Holmes helped mentor Stanford, 24, when she was a teenager.

"In terms of her being a credible [10,000m] performer at that level, absolutely," said 2004 Athens Olympics double gold medallist Holmes.

Stanford must satisfy Welsh Athletics' qualification criteria of an 'A' standard 10,000m of under 33 minutes to qualify for the event.

She ran a 10,000m in 32 minutes 39 seconds in March 2013, but the qualification period for the Commonwealth Games did not start until 1 April.

Stanford was a middle distance runner when she came under Holmes' guidance as part of the latter's "On Camp with Kelly" initiative.

When I was there watching [Non Stanford winning in London] I definitely had tears in my eyes. I just couldn't believe it

Holmes helped Stanford become a long-distance athlete before playing a part in her move to triathlon.

And as a "delighted" spectator as Stanford followed her 2012 Under-23 world title success with senior glory, Holmes has confidence in the Swansea-born competitor.

"Because of her background she definitely has that [10,000m] capability," believes Holmes, an Olympic champion at 800m and 1,500m.

"If you look at Alistair Brownlee and the times he runs, that puts him right up there with the top contenders in any 10,000m men's final at a major championships.

"And I think Non definitely has that ability to do that as well."

Holmes added: "She's gone through ups and downs that sport brings you.

"She has taken it on the chin when things haven't gone right.

"When I was there [in London] watching I definitely had tears in my eyes. I just couldn't believe it.

"And the actual race was just outstanding.

"I've always known she's been good and everybody else in that world of triathlon has seen her gradually progress.

"But to actually do that in such a short period of time just shows what talent she is and what a world class performer she is."