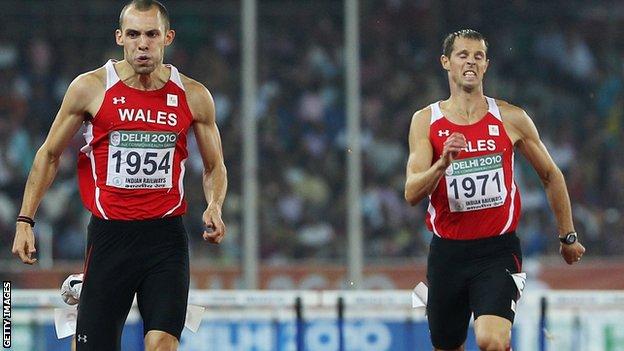 World champions Greene and European champion Williams failed to reach the final of the 400m hurdles in Moscow.

But Elias has tipped both to win medals running for Wales at Glasgow 2014.

"I hope they learn from this and take it into next year where we could potentially have a one-two for Wales," said Elias.

Greene won the gold medal, with Williams the bronze medal in the last Commonwealth Games in Delhi in 2010.

But Greene failed to defend his world title at the World Championships in Moscow when he finished in fifth place in his semi-final.

He has struggled with injury and illness in recent months and came home in 49.25 seconds, well below his personal best of 47.84 set in 2012.

"They have played down some of Dai's injury problems this year," said Elias.

"The guy trains like an animal and he had a slight calf tear going into this and I think he only managed two track sessions in the weeks building up to it. He was trying to build his fitness up in the pool and the bike.

"But unless you have some time on the track training for a major championships it is not going to happen. That showed with Dai because he didn't have that reaction off the floor and he looked tired.

"I felt really sorry for him, he has absolutely no luck whatsoever with the hernia and the calf."

Greene's compatriot and great Great Britain and Welsh rival Williams also failed to progress and finished in fourth place in 49.29 in his semi-final.

The European champion had hit some real form ahead of Moscow and he did not hide his disappointment when he failed to qualify for the final.

"Rhys has made some really big steps forward this year," said Elias.

"He has run consistently under 49 seconds, which he has never done before, and he has been in the mix since early in the season with the best guys in the world.

"I think with Rhys they may have overcooked it a bit too early. He got his peak slightly wrong by peaking in June and July instead of July and August."

The pair are both expected to run for Wales in the 400m hurdles in Glasgow 2014.