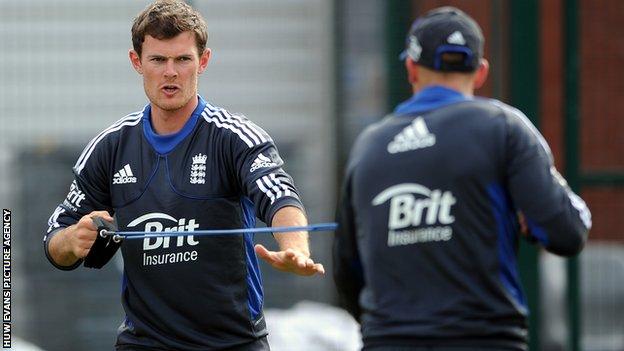 Former England captain Andrew Strauss says James Harris is like a "young Jimmy Anderson" and believes the bowler is on the verge of an England call-up.

Harris, 23, moved from Glamorgan to Middlesex in a bid to realise his Test match ambitions.

Anderson has just helped England retain the Ashes and Strauss believes Harris has the potential to make the grade at the top level.

"He is almost like a young Jimmy Anderson," he said.

"Whenever I faced him I always thought he could be very similar to Jimmy Anderson in years to come.

"He is not quite there yet, but bowling in the First Division against good players will help him get there."

Anderson is England's leading wicket taker in all forms of the game, and is third behind Sir Ian Botham and Bob Willis in Test cricket.

Swansea-born Harris has been part of the England Performance Programme squad, been named in the England Lions squad and was one of four uncapped players in England's ICC Champions Trophy provisional squad back in April 2013.

Harris, who signed a three-year deal with Middlesex in September 2012, made the decision to leave Glamorgan after the Welsh county failed to gain promotion from Division Two in 2012.

He made his first class debut at the age of 17 in 2007 and became the youngest player ever to take 10 or more wickets in a County Championship match against Gloucestershire.

Harris then became the youngest Glamorgan player to take 100 first class wickets for the county when he claimed the wicket of Phil Jacques in the victory against Worcestershire in 2010.

"His career is at the crossroads in some ways," said Strauss.

"He has been a prodigiously talented youngster and England have had their eye on him for a long time. Now he just needs to make the final leap to the England set-up. I think he has every chance of doing that."

Harris does have competition for a place in the current England set-up with fast bowler Anderson, Tim Bresnan and Chris Broad in pole position, while Graham Onions, Chris Tremlett and Steve Finn are also ahead of him in the pecking order.

Strauss applauds Harris' decision to leave Wales and head to London to realise his dream of playing Test cricket and believes he has to set his sights on an England place for the Ashes Test series in 2015..

"England selectors are looking at the First Division now for their potential England stars of the future," said Strauss.

"It was a tough and brave decision he made, having been with Glamorgan through the age-group system and all that stuff.

"I am sure a lot of people at Glamorgan were disappointed when he left, but you only get one chance of having and England career and you have to do everything you can do to make sure that works out for you.

"He is going to have to push hard and I think he is probably a year or two away still, but he is still pretty young and has plenty of time to mature."