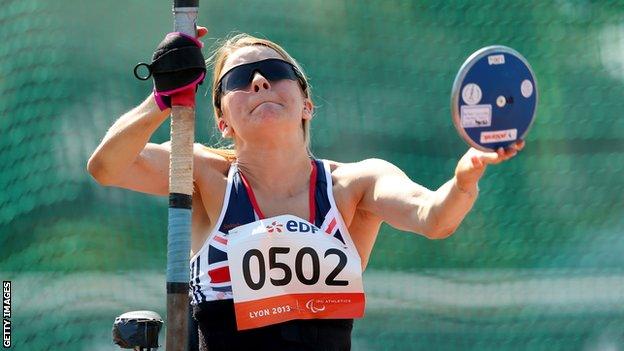 Welsh Paralympic champion and world record holder Josie Pearson's hopes of defending her discus title at Rio 2016 have been dealt a major blow.

Pearson won the F51/52/53 competition in London but the points system, to compensate for greater impairment, will no longer be used in Brazil.

The 26-year-old from Hay-on-Wye claims she has been left with no realistic chance of defending her title.

"It's just a decision that for me has been devastating," she said.

"This isn't just a hobby for me. This is my career and my livelihood we are talking about.

"This is my main event and what I'm best at and what I train for to be number one in the world."

The International Paralympic Committee announced there will be 177 para-athletics events in 2016, an increase from 170 in London, but added "some have been added and some taken away".

Pearson is not the only Welsh discus gold medallist from London 2012 to suffer. Aled Davies says he is "devastated" he will not have the chance to defend his F42 discus title in Rio.

But unlike Pearson, Davies still has the shot put event at Rio after winning bronze in London.

Pearson insisted she will lobby the IPC's decision to merge the F51 and F52 events.

"For them to turn round and tell me I'm not going to have a single class in Rio I find absolutely ridiculous," she told BBC Wales sport.

"Why would you put in something that has no athletes and take away an event that does have athletes? I can't see their [IPC] logic.

F51 - Weakness in shoulder function and the ability to bend but not straighten the elbow joint. No trunk or leg function or movement in the fingers but can bend the wrists backwards but not forwards

F52 - Good shoulder, elbow and wrist function but poor to normal finger flexion and extension. No trunk or leg function

"I'm going to do all I can to change IPC's mind. I'm going to be fighting tooth and nail that they change their minds.

"All this talk after London about the London legacy and all us gold medallists were inspiring the next generation and then they completely contradict that by taking events away that have athletes doing really well in.

"[I would have to] compete against a classification above me, which are people who are much more functional. [That] would be completely pointless because I would never win."

Asked why she thought the IPC cannot have a F51 class on its own Pearson replied: "That's the million dollar question.

"Obviously if they separated every event for every classification it wouldn't be a 10-day Paralympics it would probably be a three-week Paralympics.

"They can't physically have every classification, but for instance in my particular classification they proposing a T51 100m where there is only one person in the past four-plus years has posted a time."