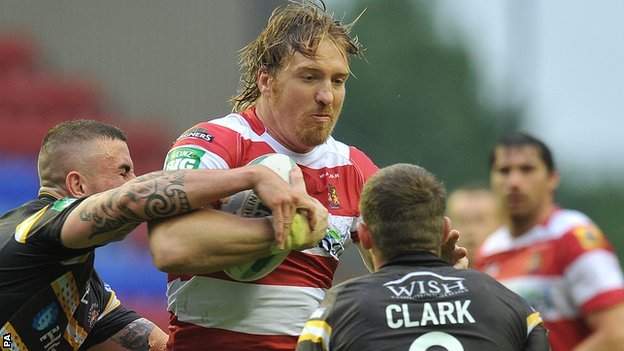 The Championship One club have come to an agreement over the forward with Super League leaders Wigan Warriors.

Powell, 31, joined Wigan from union side Sale Sharks in April 2013 following a 13-year union career in which he won 23 Wales caps.

The Scorpions are at Oldham Roughyeds on Sunday and Powell will be involved.

Scorpions coach Dave Clark said: "For us as a club it's a fantastic opportunity to get someone with such a fantastic reputation in Wales.

"What he's achieved as a player, it's a great honour for me to work alongside him and I'm sure the players will feel exactly the same. I think they'll be quite eager to get out there and play alongside him.

"There are some good teams in Championship One and it's very competitive. I think Andy will get a lot out of the game and he'll fit into the side well.

"He'll get a lot of field time with us and he'll need that to progress in the Wigan side."

The Scorpions lie seventh in the Championship One table, with Sunday's opponents Oldham second behind North Wales Crusaders.

A number eight in his union days, he also played for Leicester, Scarlets, Cardiff Blues and London Wasps.